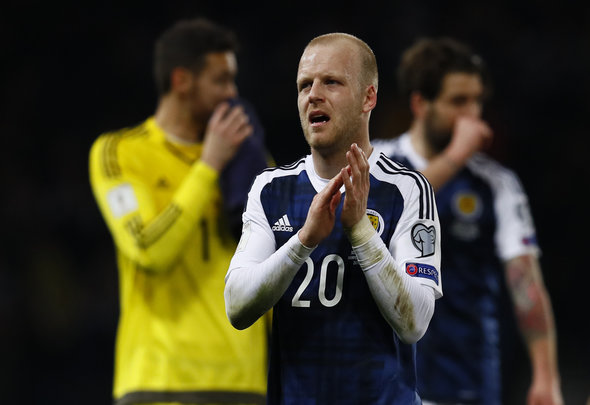 Norwich striker Steven Naismith has alerted Rangers by being ready to move back to Ibrox to play for free until the end of the season, according to a report.
The Scottish Sun claims that Naismith, 31, is set to leave Carrow Road at some point this month and he is now open to a stunning return to play for the Light Blues.
It is understood that the Scotland international is earning a bumper wage at Norwich, but in a major development that could help Rangers land the striker, he is offering to move back to Ibrox and not give any wage demands as he looks to kick his career back into life.
Kilmarnock are said to be plotting a swoop for the ex-Everton forward, who moved to Norwich for £8.5million, and that he is not short of offers to move this month.
Naismith has made just three appearances for the Canaries in all competitions this season with his last outing coming in August.
Football Insider verdict
This would be some gesture by Naismith, but a lot of fans do not seem to want to see him at Ibrox because of the way he left the club in the aftermath of the financial meltdown in 2012. The Scotland international is a clear improvement on what is currently on offer in Graeme Murty’s squad. Alfredo Morelos has been hit and miss in recent months while Josh Windass and Eduardo Herrera are perhaps not the hardest bunch to improve on. Naismith has experience and is someone who fans would regard as knowing what it’s like to be a Rangers man. If people can forget about the past the Naismith would surely work out to be a top addition to the squad this month.
In other Rangers news, the Gers have tabled a six-figure bid for this international attacker.
We’ve launched a << BREAKING NEWS FEED>> exclusively for your club. ‘Like Us’ on Facebook by clicking here if you want 24/7 updates on all Rangers breaking news.