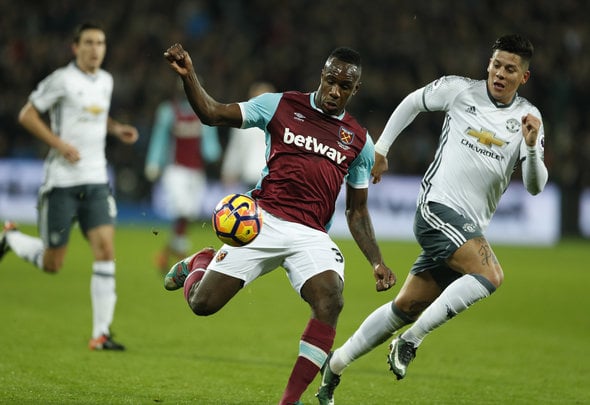 Everton boss Sam Allardyce is eyeing up a £20million move for West Ham attacker Michail Anotonio in January, according to a report.
The Mirror claim on the live transfer blog on their website (13/01, 20:36) that the Toffees are keen on snapping up the 27-year-old winger in a big money swoop, despite the Hammers’ star currently being ruled out of action as a result of a groin injury.
The English forward has made 15 appearances for the east London club this season, scoring once, but has been missing for the past four games due to his injury problems.
He signed a contract extension with the Hammers in May 2017, putting pen to paper over a deal which is set to expire in the summer of 2021.
Football Insider verdict
Everton’s summer signings have struggled to make the impact the Toffees would have hoped, and it appears as though Allardyce is looking to stamp his own mark on the playing staff at the club. Anotonio has been a crucial member of the Hammers’ squad and is a proven Premier League talent, which would warrant the £20million fee Everton are reportedly willing to spend. A move may well come down to the player’s injury situation, and it could be the Hammers want to keep him out of action until just past the end of the transfer window with their Premier League rivals circling. His return would be a major boost to the Hammers’ hopes, although the form of Marko Arnautovic may mean he faces a fight to return to the starting XI.
In other Everton news, one Everton youngster has confirmed he would prefer a move away from the club.
We’ve launched a << BREAKING NEWS FEED>> exclusively for your club. ‘Like Us’ on Facebook by clicking here if you want 24/7 updates on all Everton breaking news.