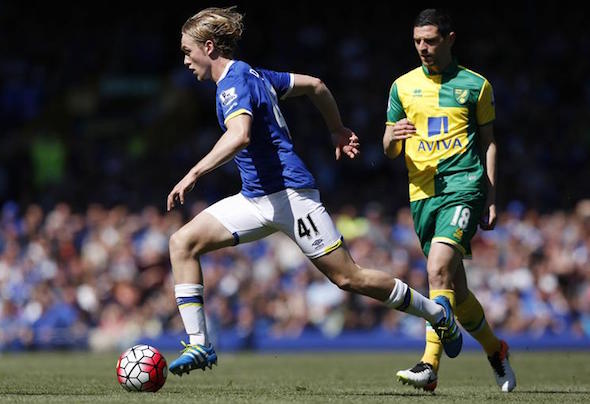 Tom Davies has agreed a new five-year contract with Everton, according to a report.

The Liverpool Echo claim that the teenage midfielder has been handed the new deal by the club as a reward for his development.

It is said he will put pen to paper on the deal later this week that runs until the end of the 2021-22 season.

Davies broke into the Merseysiders’ first-team last season, making his debut against Southampton in April before playing the full 90 minutes against Norwich on the final day of the season.

The 18-year-old is now considered a full-time member of the first-team set-up and has been involved in all of Everton’s friendly games so far this summer.

Davies captained England Under-17s at the 2015 World Cup in Chile and he was invited to train with the England senior squad last October after catching the eye of Roy Hodgson’s coaching staff.

Davies signed his first professional deal with Everton last September that runs until next summer but the club have decided to secure him to a long-term contract.

The midfielder is expected to be in the Everton squad for Wednesday night’s friendly with Manchester United.

In other Everton transfer news, the club have targeted a move for a senior Arsenal player.