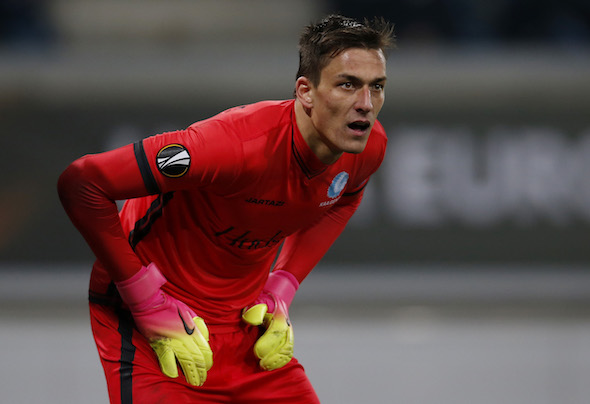 Everton are leading the race to sign one of the Gent stars who dumped Tottenham out of the Europa League, according to a report.

The Sun claim the Merseyside club were one of three Premier League clubs to scout giant goalkeeper Lovre Kalinic during his side’s 2-2 draw against Spurs at Wembley on Thursday that secured the Belgium outfit a place in the last-16 of the competition.

It is said Southampton and West Ham are also keeping close tabs on 6ft 7in Kalinic but Everton are in pole position to sign him as they line up a summer swoop.

The Sun report that Gent have slapped a £10million price tag for the six-times Croatia international, who would need a work permit to secure a Premier League move.

But that would appear to be a certainty given the keeper’s pedigree and under the new points system that exists.

Everton’s current No1 is Dutchman Maarten Stekelenburg but he has not entirely convinced since his transfer last summer from Southampton.

Kalinic only moved to Gent from Hajduk Split last month in a transfer costing around £2.5million after graduating from the academy of the Croatian club.

He is contracted to the Jupiler League club until the summer of 2021.