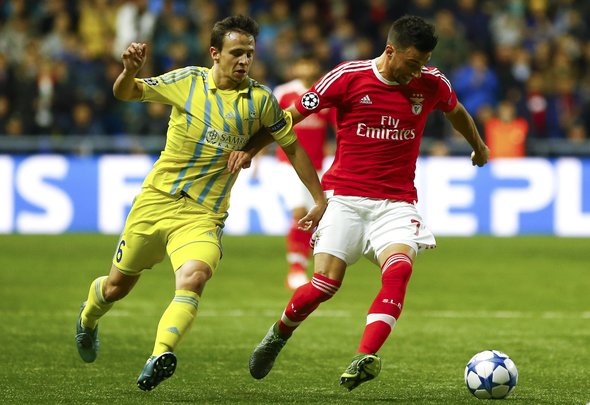 Newcastle’s pursuit of of Benfica midfield enforcer Andreas Samaris could be hitting the rocks due to Rafa Benitez’ budget constraints, according to a report.

The Mirror have claimed on their website that the Spaniard wants to bring in the midfielder in a eight-figure £17.5million capture.

However, Benitez is having to stay restrained with the club’s finances this summer and it is said that could jeopardise any move that could see the 28-time capped Greece international move to the north east of England this summer.

Samaris himself is said to be keen on a switch to England, but it is also detailed in the report that Newcastle’s “dithering” has opened the door for other clubs to make their interest known and the defensive midfielder is not prepared to wait indefinitely for the Magpies to make their move.

Samaris has been at Benfica for three years after joining from Greek giants Olympiacos in 2014 and he has helped his side lift three league titles in that time, playing 110 times in total.

Samaris’ stats read incredibly well and if he is indeed keen on a move to Newcastle the club must ensure that they do everything possible to seal his signing. £17.5million may look like a lot of money on the face of it, but some Championship clubs are now spending such figures, including close rivals Middlesbrough. It is about time Newcastle got with the time and realised that such fees that were considered to be massive 10 years a go aren’t as such now, otherwise the club could be in danger of suffering an instant relegation back to the Championship and popular boss Benitez surely won’t hang around next time.

In other Newcastle transfer news, this 2016 Magpies signing has been offered to an English club.