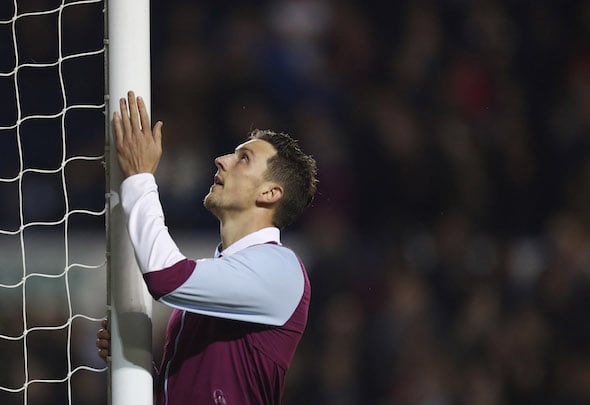 Leeds United are currently trailing in their pursuit to land Aston Villa defender Tommy Elphick during the summer transfer window, according to a report.

The Birmingham Mail claims that fellow Championship side Birmingham City are favourites to sign the 29-year-old from their local rivals.

This follows up from the story in the same newspaper which reported that the Yorkshire club were keen on bringing the defender to Elland Road next season.

It is also said that Sunderland are in the hunt to sign the Villa man this summer.

The report revealed that Elphick is amongst four Villa players who have been omitted from the pre-season tour to Germany with Gary Gardner, Aaron Tshibola and Ross McCormack all left behind.

The central defender was an important member of the Villa squad last season, making a total of 26 appearances in all competitions and captaining the side on 14 different occasions.

Elphick currently has two years remaining on his current contract at Villa Park.

Leeds have been very active in the summer transfer window but they have only managed to add one new defender to the squad and that was Pontus Jansson. Although the Yorkshire side had the fourth best defensive record in the Championship last season, they still need to bring in some new faces in the back four to boost their chances of finishing in the playoffs next season. It appears that the pull of working under Harry Redknapp has made Birmingham the frontrunners in signing the defender but the Midlands side struggled last season and only avoided relegation on the final day of the campaign. It is almost certain that the defender does not have a future at Villa Park so Leeds need to convince Elphick to move to Elland Road as it would mean fighting for automatic promotion next season.

In other Leeds transfer news, Thomas Christiansen has delivered an exciting transfer update to United fans.