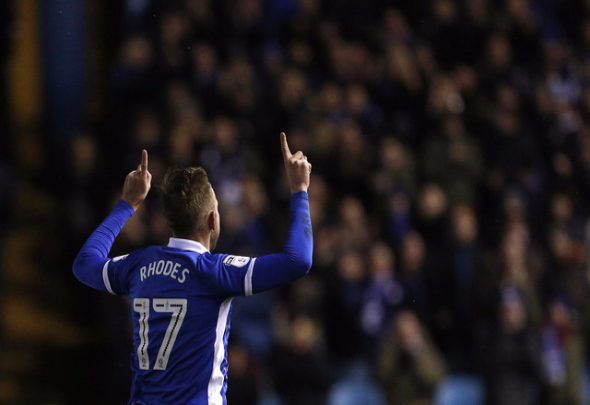 Leeds are weighing up a move for prolific Championship striker Jordan Rhodes, according to a report.

The Daily Mail report that Leeds are plotting a potential move for the Sheffield Wednesday striker to replace goal machine Chris Wood who looks set to seal a move to the Premier League with Burnley.

Wood was left out of the squad that beat Sunderland on Saturday, amid reports that he has agreed a £15million move.

There is one big hurdle to the move though and it comes in the shape of Championship rivals Wolves.

The Mirror previously reported that Wolves were look to bolster their attack with a move for Rhodes.

It was claimed that Rhodes would cost £12million and the Mail claim that they are in pole position for his signature.

One factor in Leeds’ favour is that the Mirror reported that Wolves’ heavy spending could see them “fall foul” of Financial Fair Play rules.

They have already spent £16million on Ruben Neves from Porto this summer.

Rhodes joined Sheffield Wednesday last summer for £10.5million from Middlesbrough after a successful loan period the season before.

He has consistently proved himself in the Championship, with 84 goals in 169 appearances for Blackburn, although the goals have dried up recently.

Rhodes has only managed three goals in 23 appearances for Sheffield Wednesday.

The 27-year-old striker has 14 caps for Scotland and has scored three goals on the international stage.

Leeds fans will have been buoyed by their 2-0 win over Sunderland and it showed that there is life after Chris Wood. The club were dependent on goals from Wood last season, but new summer signing Samu Saiz has proved that he can score and provide once Wood leaves. If Wood does move for £15million then Leeds have the money to bring in a quality replacement, and they can do better than Rhodes. He was scoring for fun in the Championship a few seasons back, but he hasn’t produced for his current club Sheffield Wednesday, Leeds should look to the fringes of Premier League teams for a striker who can come in and bag 20 goals and push them towards promotion.

In other Leeds United transfer news, another senior player is set to follow Chris Wood out of the exit door next week.