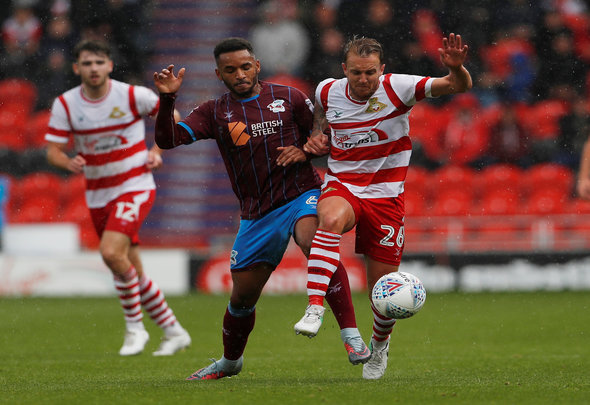 Leeds United and Nottingham Forest are eyeing up a transfer swoop for Scunthorpe United midfielder Funso Ojo ahead of the end of the January transfer window, according to a report.
The Daily Mirror claim on the live transfer blog (29/01, 12:17) on their website that the Championship duo are joined by fellow tier rivals Queens Park Rangers in hunting the 26-year-old Belgian’s signing, after impressing with the League One promotion chasers.
The former under-21 international arrived at Scunthorpe in the summer from Dutch side Willem II, signing a deal until 2020, and has been a crucial member of the first team squad, helping the club to sit fourth in their hunt for a place in the Championship.
The central enforcer has made 30 appearances across all competitions, 26 coming in the league, with a single goal and four assists to his name.
Football Insider verdict
Whether Leeds really need any more bodies in the centre of the park should be questioned when considering this move, having seen Adam Forshaw join and Mateusz Klich depart on loan already. Is he any better than what they already have at their disposal? It is tough to say, but considering he would be making the step up to the Championship after just six months in England, it probably is not a risk worth taking. As for Forest, Aitor Karanka may be looking to secure some late deals to add to his squad, but like Leeds counterpart Thomas Christiansen, he is also well stocked in the middle and another seems like an unnecessary addition.
In other Leeds United transfer news, the club have made a move for a swap deal concerning a vastly experienced international attacker.