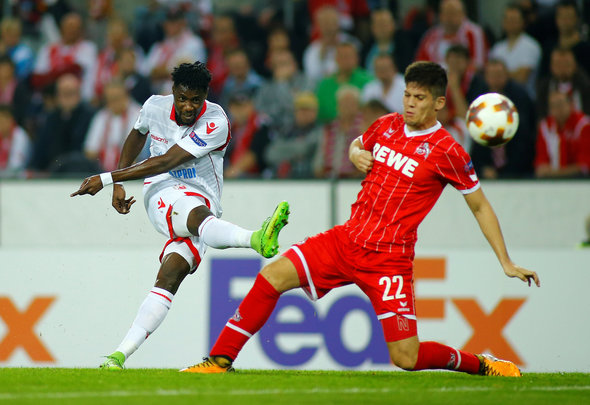 Newcastle United are joined by fellow Premier League side Crystal Palace in hunting a late swoop for Red Star Belgrade striker Richmond Boakye before the end of January, according to a report.
News outlet HITC claim that the Magpies and the Eagles are both ready to make an official move for the 13-cap Ghana international from the Russian side prior to Wednesday’s transfer deadline, after his outstanding exploits in front of goal this season.
The 24-year-old has been in red hot form, hitting home 23 goals in 28 appearances, including netting at a rate of over a goal-a-game in the league with 15 in 14 games, and has a total of 38 strikes in his 47 outings for Red Star.
Football Insider verdict
Newcastle fans know just how desperately their club need some additional firepower up front and Boakye’s impressive record this season will no doubt have them sit up and take notice. However, it must be considered he is hitting them home in the Russian league, and his European record, with one goal in six outings, might suggest what to expect were he to arrive in the Premier League. Still, form and confidence can transform an average striker into performing at another level, and if his goals were to fire the club to Premier League safety then he would be worth every penny the Magpies would have to splash out for his signing.
In other Newcastle United transfer news, an international hitman is keen on moving to the Magpies as his side seek a replacement.
We’ve launched a << BREAKING NEWS FEED>> exclusively for your club. ‘Like Us’ on Facebook by clicking here if you want 24/7 updates on all Newcastle United breaking news.