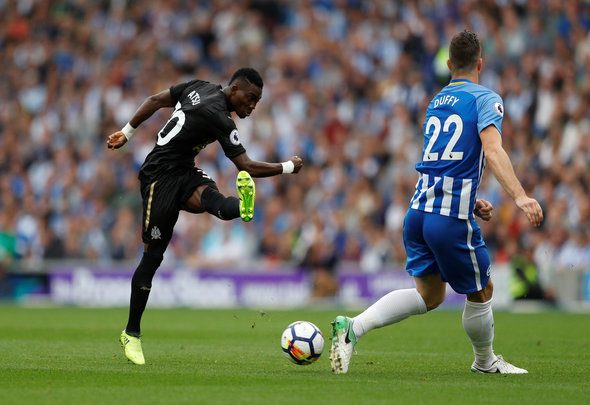 Newcastle United will be sweating over the fitness of winger Christian Atsu after he pulled out of training while on international duty while with Ghana.

The Ghanaian Football Association confirmed via their official Twitter account on Wednesday that the 25-year-old had withdrawn from the Black Stars’ training session due to a complaint over his thigh, and that medical staff would monitor his fitness ahead of the World Cup qualifying clash with Egypt on Sunday.

#Ghana midfielder Christian Atsu withdrew from today's in Cape Coast with a thigh complaint. #BlackStars doctors will continue to assess him ahead of Sunday's World Cup qualifier against #Egypt @NUFC pic.twitter.com/GoOeeJtyDi

News of the injury comes just days after Newcastle boss Rafael Benitez confirmed that the fleet footed wide man had picked up some sort of injury during the club’s 1-0 defeat to Bournemouth on Saturday, although it appeared as though he was considered fully fit to link up with his international compatriots.

He limped off with just minutes to play against the Cherries, as he continued his fine run of appearing in every one of the club’s 11 league matches this season, with just one of his outings not coming in the starting XI.

Since joining from Chelsea on an initial year-long loan in the summer of 2016, the winger has made 46 appearances for the club, netting six times and chipping in with a further four assists, impressing enough to convince the Magpies to turn his temporary deal into a permanent one in the last transfer window.

Newcastle’s next match sees them travel to Old Trafford to take on Manchester United, with Jacob Murphy the likely replacement if Atsu is not fit enough to take part.

In other Newcastle United news, the club are looking to reignite a swoop for a former target after failing with a £20million bid.