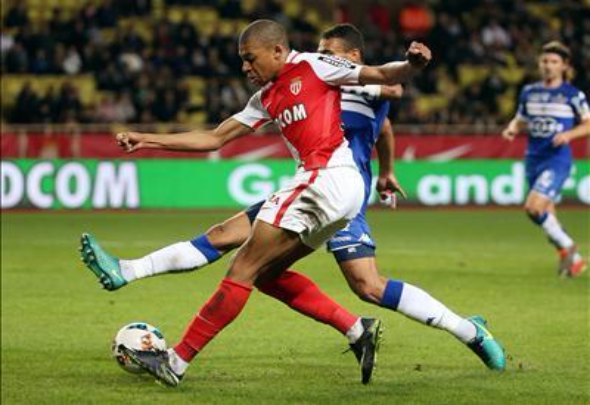 Tottenham have joined Arsenal in the race for Monaco forward Kylian Mbappe, according to a report.

The Mirror has claimed that the two north London rivals are looking to win the battle for the 18-year-old striker, who scored a hat-trick in his side’s 5-0 win over Metz on Saturday.

The three goals scored took his tally up to 11 strikes in 23 appearances in all competitions this campaign, a similar return to what Thierry Henry had in the 1997/98 season with 11 goals in 39 matches and Gunners boss Arsene Wenger believes there is some similarities between the two.

“He is not exactly Thierry Henry, but it is true that he has similar qualities and the future and talent is similar,” told Wenger to the Ligue 1 show, as quoted by the Mirror.

“The potential is similar, after that if he has the same level of motivation, desire and intelligence that Thierry has, and the next two or three years will tell us that, then he can be very promising.

“The guys that have super talent are already at 18. Those who are not playing at 18 or 19 do not have that exceptional talent and he does play over there at the top level.

“He is a guy who is electric like Thierry was, can dribble, can pass and is efficient.

“We follow him, we know him very well, and he is developing well. He extended his contract with Monaco last season and so it’s Monaco who is going to decide his future. He could be another Thierry Henry.”

As mentioned by Wenger Mbappe is currently contracted with the Ligue 1 club until the summer of 2019 after agreeing a new deal in March 2016.

But, he would certainly fit Spurs manager Mauricio Pochettino’s criteria of scouring the European market for up and coming players.

Additionally, Tottenham could be looking for a younger alternative to star Harry Kane with last summer’s signing Vincent Janssen so far proving to be a flop.

On paper this player looks like a very good target for Tottenham to have. However, so did Georges-Kevin N’Koudou and Janssen last summer and they have so failed to have any impact in north London. Fans will now always be wary of any young player coming in from Europe, but Mbappe certainly looks to have the credentials to become a star at his very young age. The striker is one of the first choice strikers at a Monaco side which sit top of Ligue 1 ahead of cash-rich Paris Saint-Germain. Additionally, Leonardo Jardim’s team have a sensational 75 goals scored from their 25 league goals this season. Tottenham need an alternative to Kane and at his age Mbappe could be the perfect player to make the move over to the Premier League.

In other Tottenham transfer news, this Premier League side have sanctioned a move for Spurs 20-year-old.