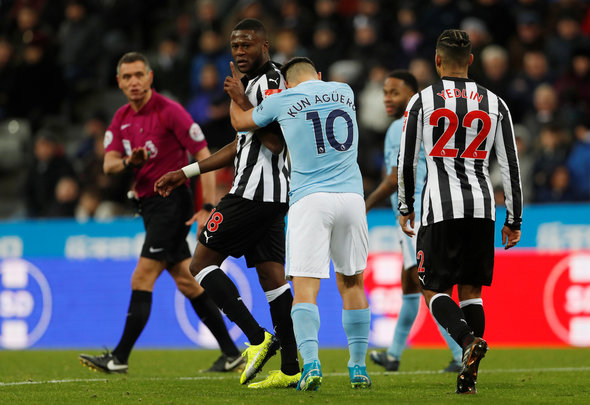 Newcastle United centre back Chancel Mbemba is being eyed up for an ambitious swoop by both Scottish champions Celtic and Belgian title holders Anderlecht, according to a report.
Football news website FootDRC claim that Hoops boss Brendan Rodgers is keen on bringing in a new defender to bolster his backline and has identified the 23-year-old Democratic Republic of Congo international as a possible option.
Meanwhile it is also said that Anderlecht, the club from which Newcastle signed the versatile enforcer back in 2015, are looking at taking their former man back, although it is said to be an ambitious swoop due to the price tag set on his head.
The report claims that Newcastle are looking to recoup at least the £8.8million (€10million) they spent on securing his signing, with the defender having become a fringe figure under Rafael Benitez.
He has made just 10 appearances for the club this season having dropped in and out of the first team set up, and is contracted at the Magpies until 2020, with a total of 58 outings under his belt.
Football Insider verdict
Newcastle know that they must sell players to reinforce their squad during January, and Mbemba seems the sort of player Benitez could be tempted to offload if the price is right. He is not a regular for the Magpies, despite having put in some impressive performances this season, and is seems unlikely he will break past Jamaal Lascelles, Ciaran Clark or Florian Lejeune when the trio are fully fit. He has proven his worth at full back, filling in on the left in place of Paul Dummett, but again, he is never going to be first choice. Anderlecht will never meet Newcastle’s demands, while Celtic are unlikely to splash that sort of cash on a defender who would not be much of an improvement on their current options. A move may happen, but neither of the top flight champions seem likely to be his destination.
In other Newcastle United transfer news, the club have held talks over securing a £10.5million move for an international attacker.