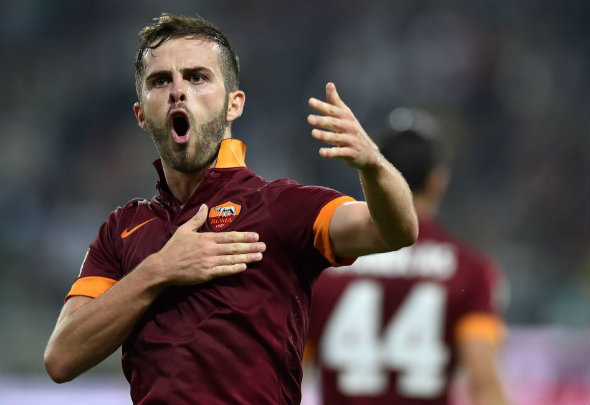 Arsene Wenger has personally contacted Miralem Pjanic about a sensational January transfer to Arsenal, according to a report.

The Sun claim the Gunners’ manager has called on the Juventus midfielder about a moving from Serie A to the Premier League.

It is said that Wenger is working towards a verbal agreement with the player as he prepares to lodge a bid of £28million this month.

The Sun report that the Bosnia international has been lined up as a replacement in central midfield for the increasingly injury-prone Santi Cazorla.

Pjanic has made a major impact since joining Juventus from Roma last summer in a move in the region of £25million.

He has scored six goals and supplied eight assists from 20 matches in all competitions, a huge attacking contribution from a player who usually plays in a deep playmaker role.

Pjanic signed a five-year deal with the Italian champions that runs until 2021 and it would be extremely complex to complete a January deal.

Cazorla, who turned 32 in December, is a key player in Wenger’s side but has suffered badly with injuries in the past 12 months, with knee and achilles problems prompting lengthy spells on the sidelines.

The Spaniard is currently out injured after having surgery on his heel, which ruled him out until at least February.

Cazorla is a huge favourite among Arsenal fans for the finesse and technical quality he brings to the midfield. But he blew out 32 candles on his birthday cake last month and, following a year in which he spent more time on the treatment table than on the pitch, it is hard to avoid the suspicion that he is in the final stages of his Gunners career. Wenger needs to begin the process of sourcing a midfielder who can bring the same calmness and composure to the central areas as Cazorla, something that Mohamed Elneny and Granit Xhaka, not to mention Francis Coquelin, are unable to.

In other Arsenal transfer news,