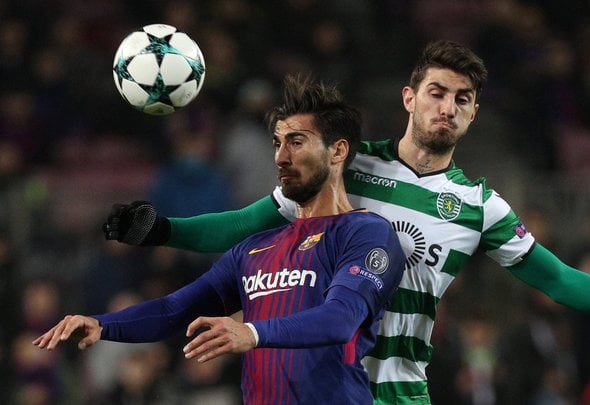 West Ham are eyeing up a temporary swoop for Barcelona midfielder Andre Gomes this month, according to a report.
The Daily Mail claim on the live transfer blog (22/01,14:34) on their website that the Hammers are keen on taking the 24-year-old Portuguese international on loan as David Moyes looks to bolster his options in midfield, but that the Catalan heavyweights are seeking to offload him permanently for £30million.
The 27-cap maestro has struggled to hold down a place in Barcelona’s midfield this season, with 20 appearances across all competitions, although only nine of those came in the starting XI.
It is also claimed the club have run the rule over Real Betis’ Fabian Ruiz but there the Hammers are said to have doubts over the 21-year-old’s ability to acclimatise to the English top flight.
Football Insider verdict
Gomes is without doubt a talented footballer, despite Barca’s willingness to let him leave, and whoever ends up securing his signing will have a top class player on their books. Can that club be West Ham? There will be a lot of interest in his services and much of that will come from clubs competing at a higher level than the Hammers, including Champions League and Europa League sides. It would a massive coup if Moyes could convince him to join up this month, while it may be an equally difficult test to agree a deal with Barcelona over a loan move, when they clearly want him off their books.
In other West Ham transfer news, the club have had to make a major change to their tactics after suffering a hammer blow.