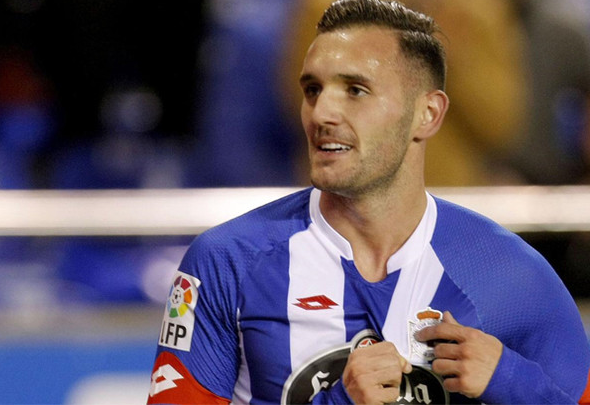 The 27-year-old was in superb form last season, as his 17 La Liga goals helped Deportivo escape the drop from Spain’s top flight.

Spanish newspaper Sport wrote in their Tuesday edition that Barcelona are taking too long to make their interest concrete.

This has opened the door for West Ham manager Slaven Bilic, who is said to be keen on bringing Perez to East London, but faces stiff competition from Villarreal, Valencia and Napoli.

The former Atletico Madrid striker has three years left on his Riazor deal and but the report stated that Deportivo are desperate to keep their star striker though and are under no pressure to cash in on him.

The article states: “Villarreal, West Ham, Naples and Valencia are interested, despite Deportivo wanting to renew his contract.”

West Ham have made it clear they want to sign a proven goalscorer this summer, with Andy Carroll the only front-man certain to stay.

Diafra Sakho and Enner Valencia have been linked with moves away, while loanee Emmanuel Emenike returned to parent club Fenerbahce.

The former Croatia manager has so far failed in his attempts to lure a striker to the Olympic Stadium despite making concerted moves for the likes of AC Milan’s Carlos Bacca, Chelsea’s new signing Michy Batshuayi and Lyon’s Alexandre Lacazette.

Bilic has signed 20-year-old Ashley Fletcher from Manchester United, but the youngster is likely to be only a back-up front man..

In other West Ham news, Bilic has been given a boost in his pursuit of this Fiorentina star.