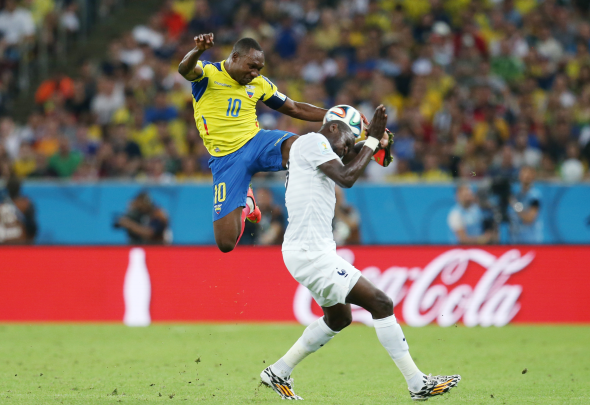 West Ham have turned their attention to Ecuadorian striker Jaime Ayovi as they desperately look to add a striker to their squad.

Manager Slaven Bilic has been knocked back by multiple strikers during the transfer market, with The Hammers finding it difficult to lure the calibre of players they’re after without the incentive of Champions League football.

ESPN claim South American sources have informed them that the East London club are keeping tabs on Ayovi, who plays for Argentinian side Godoy Cruz.

This comes as Jack Sullivan, the son of the Hammers co-owner David Sullivan, claimed on his personal Twitter account on Wednesday night that the east London club have agreed a fee with AC Milan for Carlos Bacca and the striker will make a decision on whether to make the move by Friday night.

West Ham are also working on a deal to sign Argentine sensation Jonathan Calleri, but the deal for the young forward is being held up by red tape.

Crus, 28, is Enner Valencia’s attacking partner for Ecuador, but could find him replacing his fellow countryman at the Olympic Stadium rather than teaming up with him.

The former Pachuca striker has scored six goals in 16 appearances for his current side this season, and has two-and-a-half years left on his current deal.

West Ham have made it clear they want to sign a proven goalscorer this summer, with Andy Carroll the only front man certain to stay.

Diafra Sakho and Enner Valencia have been linked with moves away, while loanee Emmanuel Emenike returned to parent club Fenerbahce.

The former Croatia manager has so far failed in his attempts to lure a striker to the Olympic Stadium despite making concerted moves for the likes of AC Milan’s Carlos Bacca, Chelsea’s new signing Michy Batshuayi and Lyon’s Alexandre Lacazette.

Bilic has signed 20-year-old Ashley Fletcher from Manchester United, but the youngster is likely to be only a back-up front man.

In other West Ham news, this new signing has outlined his aims for the season after scoring his first goal.