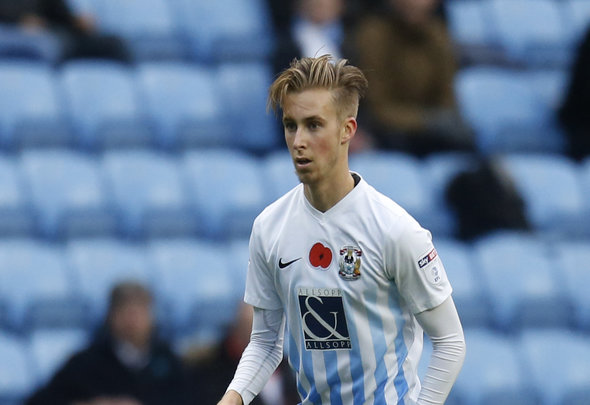 Wolverhampton Wanderers are eyeing up a move for Coventry starlet Ben Stevenson after their long-term interest in his signing, according to a report.
News outlet HITC claim that the Championship table toppers are keen on securing a deal for the 20-year-old midfielder before Wednesday’s transfer deadline, having kept tabs on his development for the last year-and-a-half.
Despite having a host of talent in the centre of the park, Wolves are hopeful on tying up the League Two side’s youngster, with him set to link up with the club’s reserve side before trying to break into the first team.
Having broken through the youth ranks at Coventry, who are currently chasing for promotion in England’s fourth tier, Stevenson has made 47 appearances, although has struggled for game time this season with just 11 outings to his name.
Football Insider verdict
With promotion back to the top flight seeming a near-certainty, Wolves will have to start preparing for the future, and it seems that Stevenson could be one of those signings.His lack of first team action does not seem to have dissuaded Wolves from pursuing his signature, though there may be concerns he has not grown as expected. Making the jump up from League Two to the Championship is a big leap, let alone a move to the Premier League, and so moving him into the reserve side seems a good way to bed him in and judge his ability. There will undoubtedly be the possibility of loan moves for first team action, while cup competitions might help him break through at Molineux.
In other Wolves transfer news, the club are in the hunt for this Newcastle forward after he filed a formal complaint.
We’ve launched a << BREAKING NEWS FEED>> exclusively for your club. ‘Like Us’ on Facebook by clicking here if you want 24/7 updates on all Wolves breaking news.