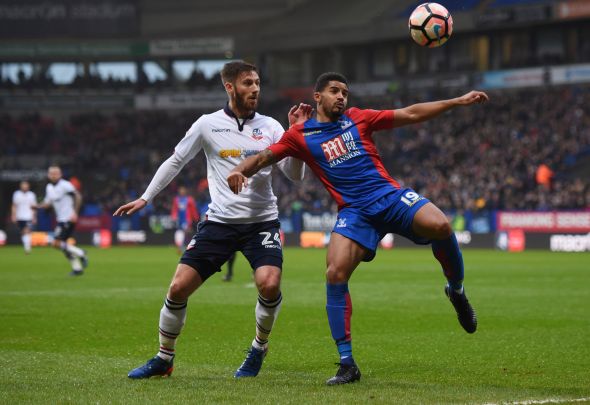 Taylor, 23, is likely to leave at the end of the season when his current Elland Road deal expires, with the York-born defender not expected to renew his contract.

Sun correspondent Alan Nixon revealed in his Sunday transfer column (page 61) that 24-year-old Fryers will be allowed to leave Palace in the summer after falling down the pecking order.

The former Tottenham ace has struggled for game time this season and is now considered surplus to requirements following the Eagles signing of Sunderland’s Patrick van Aanholt.

Fryers currently has six months remaining on his current deal, but will be allowed to leave by manager Sam Allardyce in the summer without being offered a new contract.

Possessing bags of pace with a willingness to get forward, Fryers would fit perfectly in manager Garry Monk’s system that allows his full-back to get forward and overlap the wingers.

As well as offering a rigidness at the back and top-flight experience, Fryers is also known for his physicality and upper-body strength and that could offer an extra dimension to Leeds’ side.

Palace’s number 19 possessed of plenty of potential during his Manchester United days, but has failed to realise that at both Tottenham and Palace as he struggles for game time.

At Elland Road, though, Fryers could finally live up to the hype that surrounded him earlier in his career as he would be given a regular starting spot in Monk’s promotion-chasing side.

With Tyler Denton not yet considered ready to make the step up into the first team, Fryers could be the perfect recruit for Monk’s Yorkshire giants.

In other Leeds transfer news, this Premier League player had to move to Leeds according to Jamie Carragher.