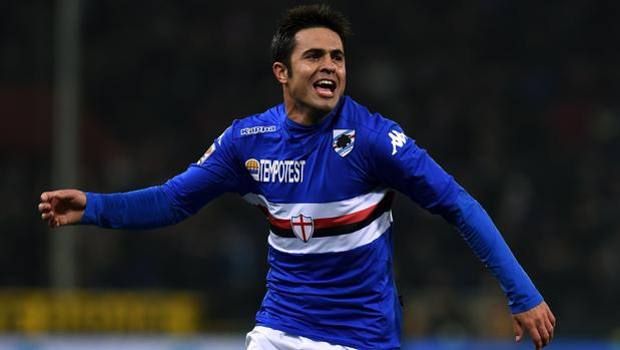 By Editor Wayne Veysey
Norwich have had a £7.5million bid for striker Eder rejected by Sampdoria, Football Insider sources understand.
The Premier League club want to strengthen their forward line next month as they bid to maintain their top-flight status.
An Italy source has told Football Insider that Norwich’s offer for Eder, submitted this week, has been turned down by the Serie A club.
Eder is on the radar of Norwich following a prolific campaign in which he has scored 10 Serie A goals, a record bettered only by Napoli’s Gonzalo Higuain.
The centre-forward, 29, signed a contract in September tying him to Sampdoria until 2020 but that has not put the Canaries off from making a bid.
Football Insider revealed on Wednesday morning that Norwich were weighing up a £7.5million bid for for Eder.
Manager Alex Neil wants a proven goalscorer who can provide greater finishing power to the team, whose top scorers this season are midfielder Nathan Redmond (four) and defender Russell Martin (three).
Cameron Jerome is the established striker at Carrow Road but he has scored only two goals this season and is not renowned for being a prolific scorer at the top level.