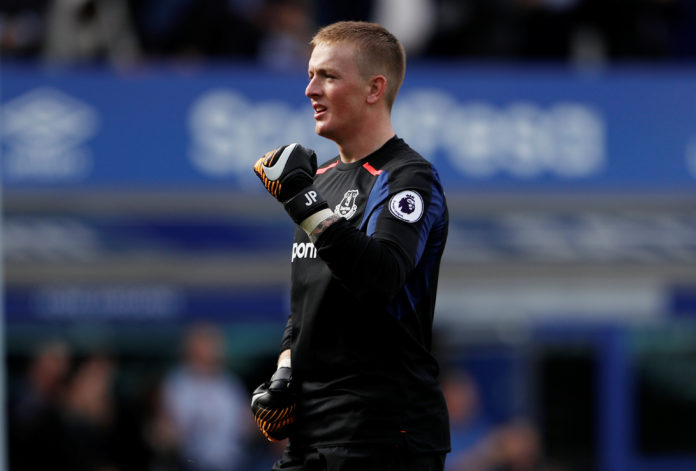 Jordan Pickford has been axed from the Everton starting line-up against Atalanta – and the club’s supporters are furious on Twitter with the decision.

The 23-year-old goalkeeper has been named on the bench in the Europa League group stage match as Maarten Stekelenburg replaces him.

The Merseyside club begin their group with a trip to Italian side Atalanta, who finished fourth in Serie A last season.

Ronald Koeman has made drastic changes to the team that lost 3-0 against Tottenham in the Premier League on Saturday and made six adjustments.

Stekelenburg, Phil Jagielka, Mason Holgate, Mo Besic, Nikola Vlasic and Dominic Calvert-Lewin are the players promoted to the side.

Everton fans on social media have raged about the decision to drop shot stopper Pickford and feel that he should have retained his place.

I'm all for squad rotation but to drop Pickford is ridiculous.

Why isn't Pickford starting? Since when do keepers need resting???

I actually like the look at this team. Obviously prefer Pickford, but more like what we should be playing than before.

Pickford is a young goalkeeper. The experience of European football will aid his development and help Everton. He doesn't need a rest. #EFC

Pickford arrived at Goodison Park in the summer from Sunderland and has managed to secure the number one position.

The England goalkeeper is a highly-rated player and has already shown fans his quality with some brilliant saves.

However, team-mate Stekelenburg has got the nod for the European match on Thursday night.

Pickford has kept three clean sheets in his opening seven Everton games and is set to be their first choice this season, but Koeman may look to rotate in cup competitions.

In other Everton news, a Sky Sports pundit has predicted the clash against Atalanta.