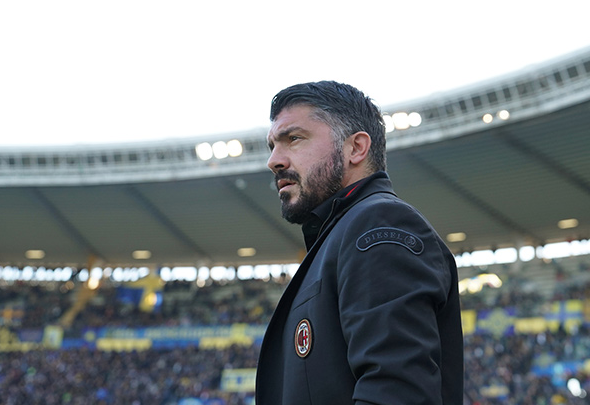 AC Milan manager Rino Gattuso has revealed Rangers icon Paul Gascoigne helped the young Italian settle in Glasgow after his move to Ibrox in 1997 as a 19-year-old.
The 40-year-old joined the Gers from Perugia a few years after Gascoigne returned to British football after a stint in Serie A with Lazio and took the future World Cup winner under his wing.
Gattuso only played 34 league games for the Gers before returning to Italy to join Salernitana before going on to become a legend in his own right at AC Milan over 13 years at the San Siro.
The Italian revealed that despite Gascoigne’s own behaviour he was regularly offering advice to the teen – despite the disgusting welcome to Ibrox he received from the Geordie genius.
“Even if from a behavioural point of view he wasn’t exemplary all the time, Gascoigne would often offer me advice and really helped me to settle in Glasgow,” Gattuso said, as quoted by Four Four Two.
“That’s the thing about Gascoigne; he’s famous for doing all those pranks – for example, he welcomed me to Rangers by doing his business in my socks – but there were also so many kind gestures that not many people know about.
“He was always thinking outside the box and making the whole dressing room laugh out loud.
“I’ll always have these memories of him and make sure that people know about his big heart.”
After being signed by Walter Smith, Gattuso was sold after only 15 months by Dick Avocaat after a falling out over the Dutchman playing Gattuso at right-back.
Gattuso won two Serie A titles, two European Cups and the 2006 World Cup during a glittering playing career.
After hanging up his boots, Gattuso had spells with FC Sion, Palermo, OFI Crete and Pisa before a return to AC Milan as youth team boss in May 2017.
Six months later Gattuso replaced Vincenzo Montella in the Milan hotseat.
In other Rangers news, it can be revealed that a key first teamer has sensationally asked to leave after the board failed to stick to their promise of giving him a new deal during the transfer window.
Don’t miss out on breaking and exclusive Rangers news by clicking here for our brilliant 24/7 updates on Facebook, Instagram and YouTube.