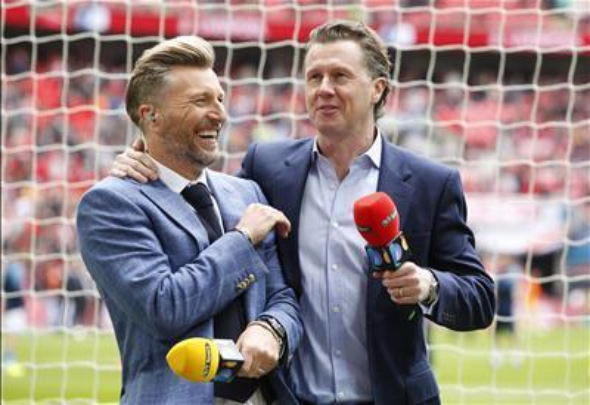 He also had six years in Scotland with Celtic between 2000 and 2006, which has ensured that his allegiances belong to the Green side of Glasgow.

The now turned football pundit has been very vocal about his feelings about Rangers this season, bringing up the points gap between the two Glaswegian rivals on a number of occasions, while also taking great delight in Mark Warburton’s recent departure from the club.

However, Savage took aim at Sutton regarding his comments about the Gers and shared that he can’t understand why the latter brings up the Ibrox club on every given opportunity.

“To be fair Mark (Pougatch),” interrupted Savage when speaking on BT Sport’s Score show on Saturday afternoon as Sutton was talking about Rangers.

“From a Celtic legend I’ve never heard somebody as obsessed with Rangers as this man here. It’s what he does all week is talks about Rangers on social media.”

Sutton then looked to defend himself, to which Savage interrupted him further with: “Not all week.”

Some may feel that the amount of criticism being aimed at Rangers at this time may be harsh given it’s their first season back in the Scottish top flight since being demoted in 2012.

However, given the club’s history and prestige others feel as though the should be performing a lot better.

But, what is clear is that Rangers need to appoint a new manager to replace Warburton as soon as possible to ensure themselves a place in next season’s Europa League.

In other Rangers news, Josh Windass trolled his crocked teammate on Twitter on Saturday.