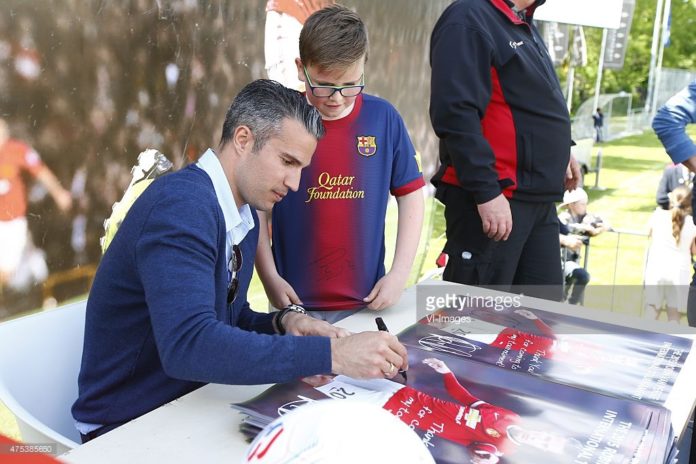 The Dutchman will fly to Turkey on Sunday to complete a £4.5million transfer after finalising the terms of the deal on Thursday.
Football Insider revealed that Van Persie has agreed to sign a three-year contract with the option for a fourth year.
It is understood that he will earn £110,000-a-week at Fenerbahce to make him the top earner in the history of Turkish club football.
Nevertheless, this is a whopping £140,000-a-week drop on his £250,000-a-week United deal, which is due to expire in a year.
Discussions have taken place between Van Persie’s representatives and United over the pay-off he will receive from the Premier League club, with the striker set to receive £2million in total spread across two installments.
Football Insider revealed on Monday that the Premier League giants had granted their approval for Van Persie to end his three-year stay at Old Trafford.
The striker, who turns 32 next month, has been allowed to leave because he is no longer regarded by Louis van Gaal as a first-team regular and United are keen to free up space on their wage bill.
Van Persie has been willing to depart Old Trafford this summer, but, knowing he could not expect to earn his United wages at another club due to his age and recent form, held out for a pay-off which would enable him to get close to meeting the shortfall of the salary drop he would get at another club.
The £24million signing from Arsenal scored only 10 times last season. While his campaign was once more disrupted by injury, Van Persie found himself behind even the misfiring Radamel Falcao towards the end of the season.

The forward has been open over the uncertainty over his United future after he found himself on the sidelines when he returned from injury at the end of last season.
Speaking while on international duty in May, Van Persie was open about the prospect of leaving. “It’s a strange, difficult situation,” he said. “A new situation, that’s a better word. I have to think in a realistic way. It’s my ambition to play the next years. I’m thinking about my family and my children with every decision I take.”
Van Persie was the double-winning Player of the Year as he shot United to the Premier League title in his first season at Old Trafford but his goal return diminished in the subsequent two campaigns, following up his haul of 30 goals in 2012-13 with 18 and 10.