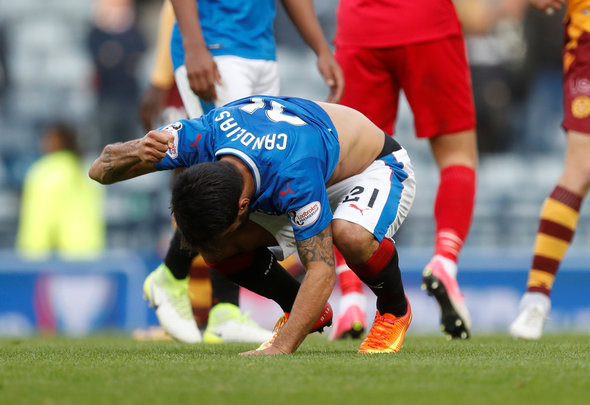 Motherwell forward Ryan Bowan has taken a swipe at Rangers players for making themselves look like “idiots” after they lost in the Scottish League Cup semi-final at Hampden Park on Sunday.

Louis Moult scored a brilliant second-half double to give the Well a shot at major silverware in the final against Celtic next month.

Bowman, 25, was at the centre of controversy at the weekend when his flailing elbow broke the nose of Gers defender Fabio Cardoso in what was a very physical affair that somehow ended up with all 22 players still on the pitch at full-time.

The managers weren’t on the touchlines though, as Pedro Caixinha and Stephen Robinson were sent to the stands in the aftermath of Cardoso being hurried down the tunnel with a bloodied nose after his clash with Bowman.

Now though, the Well striker has poked fun at the Rangers players for acting as though the game was already won before kick-off.

Many expected an Old Firm derby in the League Cup final, but Bowman is happy to have upset a few fans, as well as the complacent Gers players.

“Everyone was writing us off outside of Motherwell,” he said, as quoted by the Scottish Sun.

“A few of the Rangers players were even tweeting ‘win or win’ on the back of their manager saying they had two options — win or win.

“That was a bit disrespectful, but it just gave us even more fight and fire.

Bowman has been ever-present in what has been an impressive start to the season for Motherwell.

The English forward has scored five goals and supplied three assists in 15 appearances across all competitions for the Steelmen, but will be lucky to have not picked up a suspension after his antics at the weekend.

In other Rangers news, this Gers 23-year-old has confirmed when he will return from his injury blow.