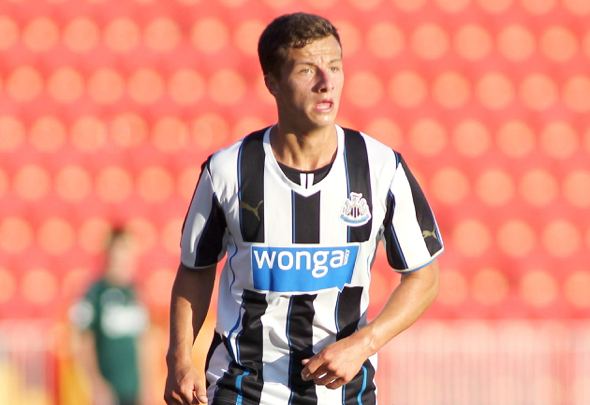 Kilmarnock are interested in signing Newcastle defender Jamie Sterry, according to a reliable journalist.

The Chronicle’s chief sports writer Lee Ryder has revealed on his personal Twitter account that the Scottish club are interested in a loan deal for the 21-year-old.

Kilmarnock are now hopeful of signing a fourth Newcastle player on loan as they look to battle relegation.

Sterry spent the first-half of the season on loan at Coventry, where he made 20 appearances for the Sky Blues.

The young right-back has made just two senior appearances for Newcastle and seems unlikely to break into Rafael Benitez’s first-team in the near future.

The Magpies already have two senior players battling for the right-back slot as Vurnon Anita and De Andre Yedlin contest the position.

The Magpies should allow young defender Sterry to join the Newcastle contingent at Kilmarnock this January. He is likely to experience regular first-team football with the Scottish club and he will be able to test himself in the Scottish Premiership. Benitez is currently focusing on getting Newcastle back to the Premier League and is unlikely to test his younger players during crucial fixtures for the club. Sterry remains a potential first-team player for the future and Kilmarnock would be a good test for him. He was a regular in Coventry’s starting line-up during his loan spell and Kilmarnock would be a good next step in his development.

In other Newcastle transfer news, the club have made an approach for a rival playmaker.