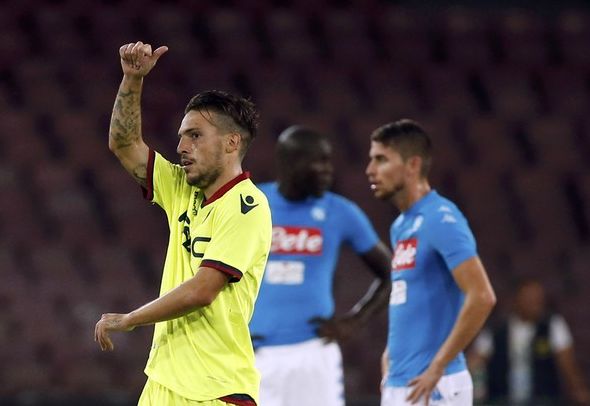 West Ham are monitoring the performances of Bologna attacker Simone Verdi, according to a report.

Italian news outlet Tuttomercatoweb claim that the Premier League club sent scouts to watch the winger in action for the Italian side during the win over Chievo on Sunday.

Verdi, 24, gave an impressive display during the victory, bagging a goal and an assist with West Ham scouts likely to return to Slaven Bilic with a glowing report.

Bilic is likely to be in the market for several new attacking options this summer, after seeing his side struggle in front of goal throughout the current campaign.

Both Andy Carroll and Diafra Sakho have struggled with injuries, while youngster Ashley Fletcher and flop Jonathan Calleri are not viable alternatives.

Verdi, on the other hand, could ease the goalscoring burden from the wider areas, or as a No.10 – a role in which the Italian has thrived this season.

One of the main criticisms of West Ham this season has been their failed recruitment campaign. Bilic made a large number of summer additions, but very few have gone on to make a lasting impact in the first-team squad, and it has seen them struggle. The Croatian boss will need to make amends in the summer, but a move for Verdi would come with similar risk. Verdi is neither a proven Premier League performer, or a man with big-club experience. He may well become a success story at West Ham, but a deal represents too great a risk and should be avoided unless they cannot acquire other targets.

In other West Ham transfer news, this is why Liverpool could pull the plug on reported pursuit of key Hammers man.