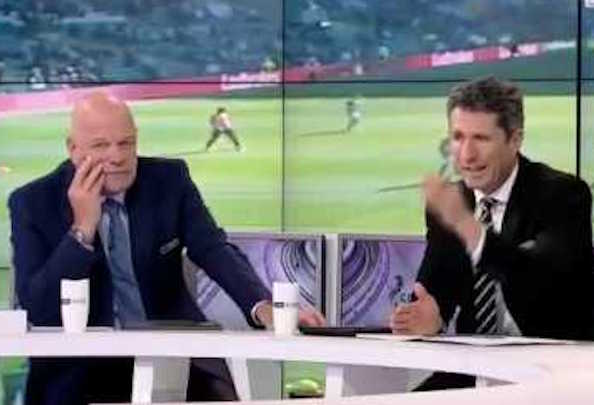 Andy Gray has called on Rangers to sell Alfredo Morelos after his fifth red card of the season in Sunday’s derby defeat to Celtic.

The beIN Sports pundit and former Ibrox striker was fuming at the “loose cannon” for costing his boyhood heroes in the explosive Premiership clash that the Hoops won 2-1.

Gray and John Collins clashed on live TV as the one-time Celtic midfielder and assistant manager hit out at Scott Brown for goading Morelos and the Rangers players.

Speaking on beIN Sports, Gray said: “What can Morelos say? Nothing. But I hope his team-mates are saying plenty to him.

“I’d said to you before the game, if I was a centre-back I’d be winding him up because he’s a loose cannon.

“And Scott Brown did just that. He had a flick at him with his foot, Morelos did what Morelos does: lifts his elbow, smacks him on the chin and now he complains about being sent off.

“I don’t get him. And you can’t condemn Brown. It’s part of football.”

Collins disagreed and he said: “I wouldn’t encourage my players to do that. You call it clever but I can’t condone it. I don’t like to see it. But Morelos is a liability in big games.

“I hear so many times from Scottish journalists, ‘he’s a class player, a top player’. To be a top player you have to have a top mindset and be able to control yourself. He’s just cost his team.”

Gray added of Morelos on beIN Sports: “I’d sell him. I know it’s an easy thing to say but I’d seriously have to think about selling him. That’s five red cards this season. It has cost Rangers again. He’s scored 29 goals – against who?

“Not in the games that matter because he’s been sitting in the dressing room by himself and with his thoughts. Good luck to him.”

💥 Morelos sees red in the #OldFirm!

Andy Gray calls him a "liability" and a "loose cannon" and wants #RangersFC to sell him!#SPFL #CELRAN 📺 HD11 pic.twitter.com/zkRwpodMJQ

In other Rangers transfer news, it can be REVEALED that the Ibrox club are on the verge of signing a player after agreeing the terms of a £15,000-a-week deal.