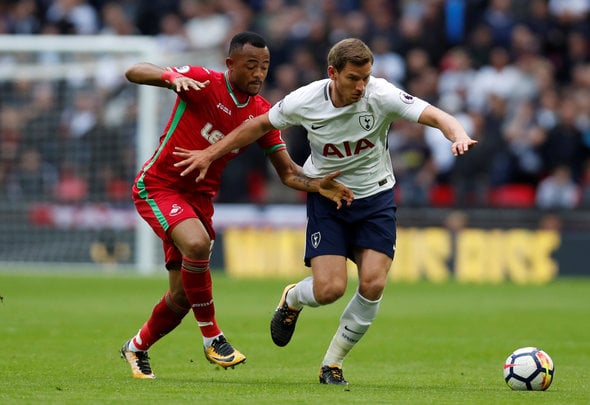 Belgium manager Roberto Martinez has been singing the praises of Tottenham defender Jan Vertonghen as he looks to break the all time appearance record for his country.

The centre-back has been a crucial member of the first team squad since making his debut against Portugal back in 2007, and is now just two appearances from securing his place in Belgian history.

Sitting on 95 caps for his country, he is just one short of the current record of 96 appearances set by Jan Ceulemans, and could break the record by appearing in both of Belgium’s World Cup qualifiers against Bosnia and Herzegovina and Cyprus during the international break.

His national manager Martinez, who has held the role since August 2016, has heralded the 30-year-old’s achievements, stating that the leadership he brings to the squad is essential.

Speaking to the press, he was quote by Sky Sports as saying: “It’s important we can have leadership and personality creating a team.

“That’s where Jan is essential. He’s a leader, he’s a really experienced head and that’s important.

“To get 95 caps at this stage of his career is a sensational achievement. That just shows you the professionalism that he has.”

Vertonghen has scored six goals for his country, the latest coming in a 2-1 victory over Greece back in March 2017, while he has also been handed the captain’s armband at various points throughout his international career.

As for his club form, he has appeared in all but one of his club’s matches across all competitions this season, finding himself suspended for their Champions League tie away to Apoel Nicosia thanks to a sending off for two bookable offences.

He has made 213 appearances since arriving from Dutch giants Ajax, and has managed to score nine times during his five years at the club.

In other Tottenham news, a pair of Sky Sports pundits have backed Harry Kane to break this world record.