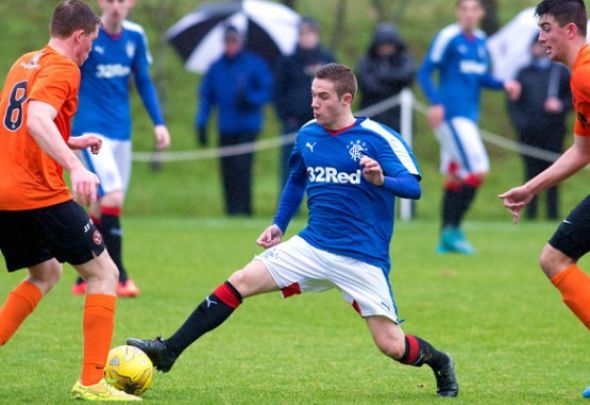 Young Rangers forward Serge Atakayi has revealed midfielder Liam Burt to be the most skillful player in the Gers academy.

The Glasgow giants have a fantastic history of bringing players through their youth system and most recently Myles Beerman and David Bates have made the step up from the Under-20s to the first team.

Billy Gilmour, 15, is also considered a bright prospect in the youth ranks and has regularly been linked with a move to the Premier League at his young age.

However, Atakayi has shared that Burt’s footwork trumps the aforementioned trio and in a Twitter question and answer session on Wednesday afternoon he named the 18-year-old as the most skillful.

I would say @LiamBurt10 is the most skilful in the youth team https://t.co/UULPWJJem5

Astonishingly, Burt was part of the Celtic youth system before being released and joining Rangers in 2014.

He has since made three appearances for the Gers senior team, marking his debut as a 17-year-old against Ratih Rovers in the Scottish Championship in March 2016.

The two-time capped Scotland Under-21 international has only made the one appearance for the Rangers first team in all competitions this campaign, coming on as a injury time substitute in the 2-0 December win against Hearts in the Premiership.

However, with his contract set to enter it’s final year this summer he will be keen to prove he has the skill level to make the step up full time.

In other Rangers news, Alex McLeish believes this Gers side would beat the current Celtic team.