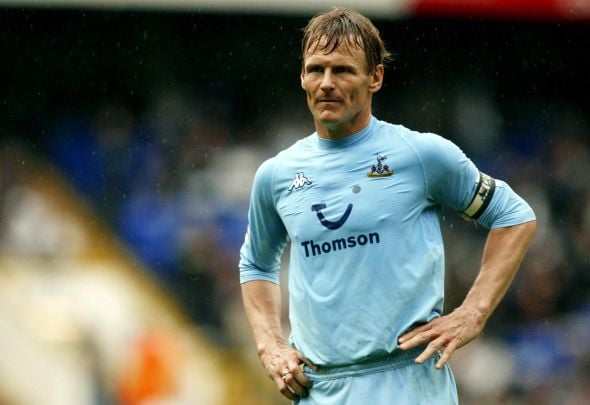 Ardiles managed Spurs between 1993 and 1994 and despite his failure to sign Maradona, his ambition eventually led to him sign German attacker Jurgen Klinsmann instead.

Maradona was playing for Argentinian club Newell’s Old Boys at the time of Ardiles short reign as White Hart Lane boss and was approaching the end of a career that was littered with both brilliance and controversy.

The 1986 World Cup winning superstar was in the twilight of his career but was still someone that Sheringham really wanted to play alongside.

“It wasn’t till about ten days later that we had a little meeting and he pulled me into one of the little offices there [at White Hart Lane] and he says ‘look, I’ve decided not to get Maradona…but I’ve got someone else you might like playing with’ and I was as eager as ever and just went ‘go on then’ and he went ‘I’m bringing Jurgen Klinsmann in’.”

Kilsmann went on to play 68 times for Spurs, scoring 38 goals in all competitions before leaving the club in 1995 for Bayern Munich.

Sheringham played for Tottenham between 1992 and 1997 before returning for a second spell which lasted two years in 2002.

The former Manchester United and West Ham striker scored 124 goals for Spurs in 277 appearances and is their ninth highest goal scorer of all time.

Ardiles, 64, enjoyed a much better spell as a Spurs player than manager.

He was handed the reins after a successful stint as West Brom boss, but was sacked after he led the club to a disappointing 15th place finish in the Premier League, despite his high-profile acquisition of Klinsmann.

In other Tottenham news, this 25-year-old goal machine has responded to reported interest in him from Spurs.