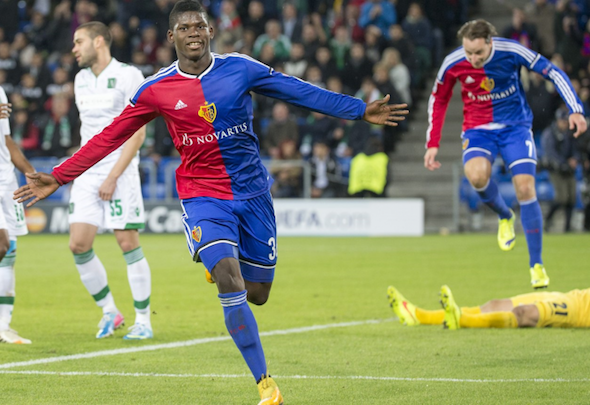 Tottenham are set to miss out on Swiss sensation Breel Embolo, according to a report.

Sky Sports’ website, citing a report by German newspaper Bild, claim Schalke have agreed a £15.4million deal with Basel for the striker.

Basel spearhead Embolo was on the London club’s shortlist of striker targets as they press ahead with plans to strengthen their attack this summer.

But Football Insider revealed earlier this month that Spurs had strong reservations about signing a player directly from the Swiss league.

It now appears that he is headed for the Bundesliga, where he will follow in the path of countrymen Xherdan Shaqiri and Granit Xhaka.

Embolo has been closely monitored on the back of his performances for club and country since breaking into the Basel team at the age of 16 and dubbed Switzerland’s biggest prospect since  Shaqiri.

He scored 13 goals and supplied nine assists in 40 appearances in all competitions for Basel this season and has represented Switzerland at Euro 2016.

The teenager has already been awarded 12 senior caps, scoring one goal, and has struck 31 times in 90 matches for Basel.

Basel sporting director Georg Heitz admitted earlier this month that Embolo is headed to one of two destinations as he assessed their prospects of hanging on to the highly rated 19-year-old striker.