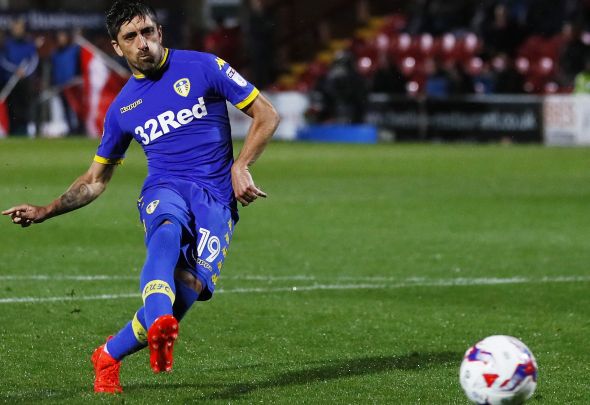 By Richard Parks
Pablo Hernandez has revealed he would love to be at Leeds United again next season – and fans have taken to Twitter to urge the club to tie him to a new deal.
The Spanish attacking midfielder, who has been one of the team’s most consistent performers in a disjointed season, is out of contract at the end of the season.
Asked at a media conference on Tuesday to preview Leeds’ Championship clash against Derby County on Wednesday night, Hernandez admitted he is very keen to extend his stay at Elland Road to a third season.
“”Yes. obviously. I’m very happy here,” said Hernandez, as quoted by the personal Twitter account of Yorkshire Evening Post correspondent Phil Hay, while adding, “it doesn’t depend only on me”.

Would Hernandez like to stay next season? “Yes. obviously. I’m very happy here. It doesn’t depend only on me.” #lufc

Hernandez, 32, once again demonstrated his calibre with his integral role in Leeds’ comeback draw against Bristol City on Sunday, supplying one assist and helping create the other of his side’s goals in the 2-2 draw at Elland Road.
The former Spain international has scored six goals and supplied eight assists from 32 matches in all competitions in what is his second season at the club.
Hernandez was signed in initially on loan in the summer of 2016 before joining permanently from Qatari club Al-Arabi in January of last year.
United fans on social media are calling for the club’s top brass to waste no time in securing Hernandez to a new deal after his comments.
Here is a selection of their messages on Twitter:

Give him a contract

Get the deal done then simple as that…but then again it is leeds!!????

They have to give him a new deal.

Please @andrearadri give him whatever he wants.

Sort it out. Class

Get it done he is different class

Hernandez is set to be in action for Leeds again on Wednesday night when they travel to fourth-placed Derby County for a key Championship encounter.
In other Leeds United news, Paul Robinson drools over the one player at Elland Road who has blown him away this season.
Don’t miss out on breaking and exclusive Leeds news by clicking here for our brilliant 24/7 updates on Facebook, Instagram and YouTube.