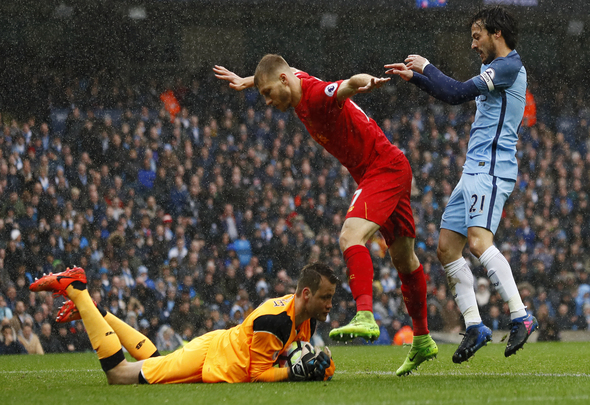 Simon Mignolet has taken to Twitter to praise what was an exciting game between Liverpool and Manchester City.

After 90 minutes jam-packed with action and controversy, the two sides settled on a 1-1 draw after James Milner and Sergio Aguero both scored for their respective sides.

The Liverpool shot-stopper had a busy start to the game as he was forced to deal with a number of venomous driven efforts at his goal.

However his chances of bagging his seventh clean sheet of the season were dashed when Aguero broke through the Reds defence to cancel out Milner’s converted spot-kick.

Aguero and Adam Lallana went on to miss big chances and both sides had penalty appeals waved away by referee Michael Oliver.

Despite this, Migonlet was happy to walk away from the Etihad with the draw.

“High intensity game with attacking football by both teams. Solid point in the end,” said the former Sunderland keeper on his personal Twitter account.

There has been a lot said about the two Liverpool goalkeepers this season but Mignolet appears to have emerged as Jurgen Klopp’s first choice ahead of Loris Karius after the German shot-stopper was brought in the summer to become the club’s new number one.

After missing 10 league games to Karius, Mignolet has since started each game since mid-December.

In total he’s made 22 appearances for Liverpool this season and has conceded 25 goals.

Since moving to Merseyside in 2013, the 29-year-old has made played 171 times for the club in all competitions.

In other Liverpool news, Jamie Redknapp says what the club must do to finish in the top four.