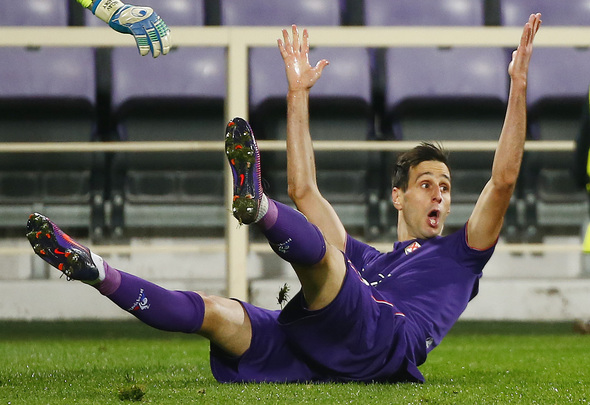 Everton are ready to table a bid for Fiorentina striker Nikola Kalinic, according to a reliable journalist.

Sky Italy reporter Gianluca Di Marzio claimed on his personal website that the Toffees are plotting to approach the Serie A side with an offer worth £22.6million, but are having the put up with competition from AC Milan.

It is understood that the 29-year-old ex-Blackburn forward is now ready for a transfer away from Fiorentina but would rather stay in Italy and secure a switch to the San Siro if they make an approach for him.

However Di Marzio adds that he would consider a move to Everton if AC Milan and Fiorentina cannot agree on a deal.

Croatia international Kalinic is no stranger to football in the Premier League after having a two-year spell at Blackburn, which ended in 2011 when he moved to Dnipro.

The European forward signed for Fiorentina in 2015 and has since found himself enjoying a great patch of goal scoring form as he netted on 20 occasions across all competitions last season.

Everton have already made some good signings this summer but a £22.6million raid for Kalinic seems as though Ronald Koeman is making a rash decision in order to find himself a new striker. Serie A is a completely different league to the Premier League and the Croat is likely to struggle to find the net. He is more experienced now, but if his spell at Blackburn is anything to go by, he cannot be relied upon to fill the void left by Romelu Lukaku. Instead, Koeman should really try to step up his reported pursuits of players that are already in the Premier League. Kalinic hasn’t given much indication that he is any better than Sandro Ramirez, who is going to show himself as a great investment over the course of the next few seasons.

In other Everton news, this manager has confirmed that he is interested in signing a Toffees attacker who only move to Goodison Park last season.