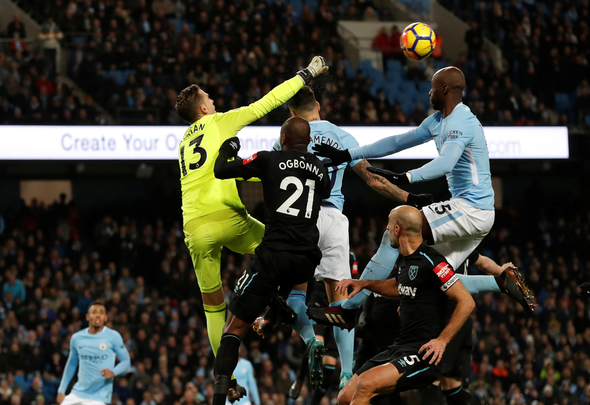 Everton are expecting to secure a deadline day loan move for Manchester City defender Eliaquim Mangala after leapfrogging Newcastle United for his signing, according to Sky Sports.
The broadcaster claim on their official Twitter account, as well as the live transfer blog (31/01, 06:13) on their website, that the Toffees are leading the charge for the central powerhouse after the Magpies, as well as Spanish side Valencia, held talks over his signing.

The eight-cap France international has struggled for regular game time in City’s line up this season, with just 15 appearances to his name, 10 of those coming in the starting XI while four were made in helping the club reach the League Cup final.
Football Insider verdict
Everton brought in Michael Keane at centre back over the summer and he has been rotated along with Phil Jagielka and Ashley Williams at the heart of the Toffees’ defence. They could still use some more strength in there and Mangala on loan seems like a very sensible signing. His experience for both club and country could prove to play a crucial role in pushing the club up the table, plus he undoubtedly has a point to prove after failing to impress at City. He will have to fight to be a regular at Goodison Park, but the added competition will only be a boost to the first team squad.
In other Everton transfer news, a fringe figure is set for a deadline day exit to a top-eight side.
We’ve launched a << BREAKING NEWS FEED>> exclusively for your club. ‘Like Us’ on Facebook by clicking here if you want 24/7 updates on all Everton breaking news