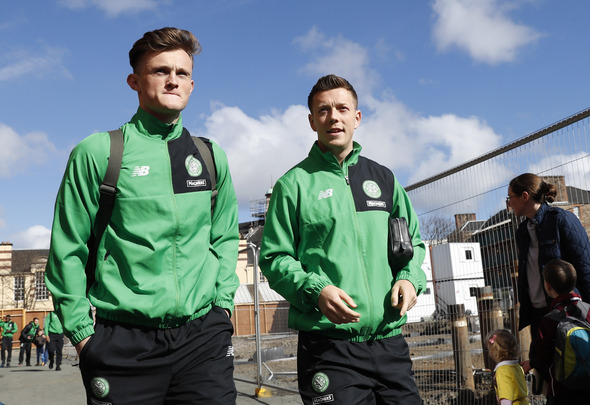 Celtic player Liam Henderson is on the verge of leaving Parkhead and signing for Italian Serie B club Bari, according to a reliable journalist.
Sky Sports reporter Keith Downie claimed on his personal Twitter account on Wednesday morning that Henderson, 21, has jetted out to Italy to partake in a trial with Bari and has impressed them enough to warrant a move.
It is understood that the Italian second-tier club are now close to completing a deal after the Daily Record reported that the midfielder had been offered a contract.

Italian side Bari are close to completing a deal for Celtic’s Liam Henderson following a successful trial.

Henderson is out of contract at the end of the season and would be able to leave Celtic on a free transfer.
The 21-year-old has played just once this season when he came off the bench against Dundee in the Scottish Premiership.
He is now poised to help Bari in their bid for promotion to Serie A.
The southern-Italy club are currently fourth in Serie B under the management of Fabio Grosso, five points behind leaders Palermo.
Football Insider verdict
Henderson certainly has potential, but he is just not able to reach it at Parkhead with his route to the first-team blocked by an array of top central-midfield talent. The Hoops have not really had any injuries in that area of the squad this season and that has meant that Henderson has barely had a sniff of even making the bench. The 21-year-old should be a good signing for Bari but it is a bit of a bizarre move. Not many British players, let alone Scottish players, move to Italy, especially at an early stage of their career. The move is so odd that it could be a masterstroke to get the midfielder’s career back on track. He will likely be back in Scotland soon.
In other Celtic news, Chris Sutton has suggested that the Bhoys lost out when this goalscoring defender exited Parkhead.
We’ve launched a << BREAKING NEWS FEED>> exclusively for your club. ‘Like Us’ on Facebook by clicking here if you want 24/7 updates on all Celtic breaking news.