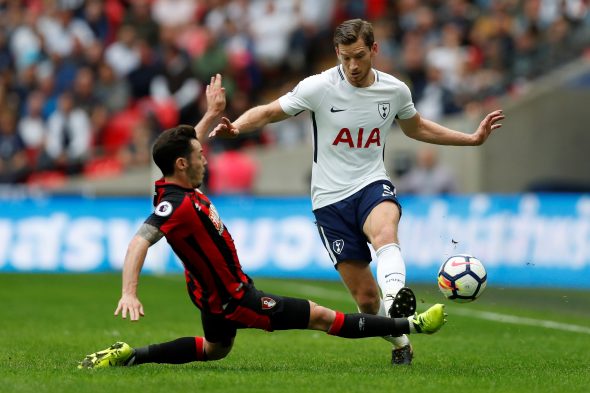 Tottenham defender Jan Vertonghen has sustained an injury on international duty, according to a report.

Sky Sports News claims on their official Twitter account that Vertonghen, 30, will play no part in Belgium’s friendly with Mexico on Friday after suffering a setback.

Chelsea forward Michy Batshuayi is also said to have been ruled out of the international friendly clash.

Vertonghen is the latest in a spate of Tottenham players to have been ruled out of international matches this week with Harry Kane, Harry Winks, Dele Alli, Hugo Lloris and Toby Alderweireld all out of action for their respective nations.

While none of their injuries are thought to be serious, it is perhaps a bit of a coincidence that Spurs’ next game is against bitter North London rivals Arsenal in the Premier League.

Spurs will no doubt be hoping that there is nothing serious about Vertonghen’s setback as he, like the others mentioned, is a key player in Mauricio Pochettino’s first-team squad.

He has made 15 appearances across all competitions this season for Tottenham, playing a vital role in the heart of defence with Alderweireld and Davinson Sanchez being his usual partners in the back three.

If Spurs are without Belgian duo Vertonghen and Alderweireld for the game against Arsenal, it’s likely that Pochettino would switch to a four-man defensive line or hand players like Eric Dier and Juan Foyth roles in the defence.

In other Tottenham news, Spurs have been joined by a Champions League club in their January race for this midfield wizard.

‘You’ve got to take your hat off to him’ – Exclusive: Bruce in awe of Spurs player reveal