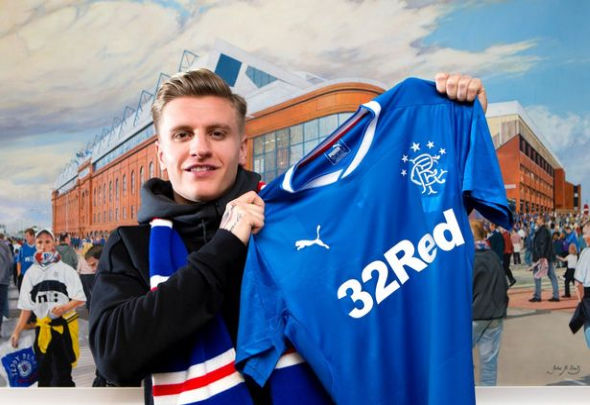 New Rangers star Jason Cummings has revealed he has “always” wanted to play in an Old Firm clash after completing his loan move from Nottingham Forest on Monday night.
The 22-year-old has joined the Ibrox giants on loan until the end of the season with the Gers having the option to sign the striker permanently in the summer.
Cummings is Rangers’ fourth signing of the January transfer window with Sean Goss and Jamie Murphy both agreeing loan deals while Declan John made his switch from Cardiff City permanent.
The former Hibs striker revealed he is motivated by playing in “bigger games” and admitted he “can’t wait” to sample his first as a player.
“I love playing in bigger games, and the bigger the game is, it motivates me more,” Cummings said, as quoted by the Gers’ official website.
“There are a lot of big games in this league, especially the Old Firm games.
“Something I have always wanted to do since I can remember is to play in an Old Firm game and I can’t wait to be part of one.”
Cummings scored 71 times for Hibs in 149 appearances before moving to Championship side Nottingham Forest over the summer.
The Scotland striker managed four goals in 17 appearances at the City Ground but the sacking of former Rangers boss Mark Warburton meant it was likely the striker would be moved on.
Once Forest appointed Aitor Karanka as Warburton’s replacement and Cummings’ future became a bit clearer the Gers moved to bring him to Ibrox.
Cummings will likely make his Rangers debut when the Gers travel to tiny Bellslea Park on Sunday to take on Highland League minnows Fraserburgh in the fourth round of the Scottish Cup.
In other Rangers news, this international is expected to undergo a medical with the Gers on Tuesday.
We’ve launched a << BREAKING NEWS FEED>> exclusively for your club. ‘Like Us’ on Facebook by clicking here if you want 24/7 updates on all Rangers breaking news.