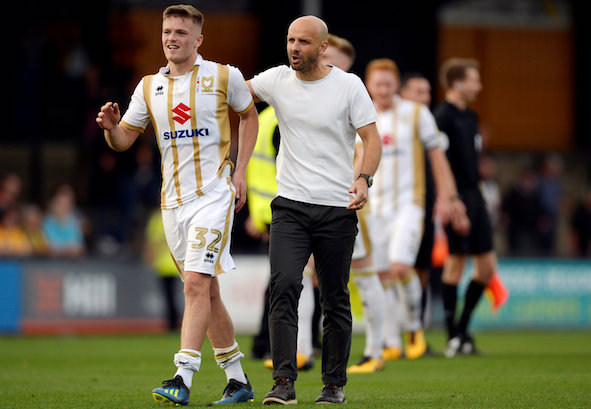 Rhys Healey has joined French side Toulouse after MK Dons accepted a bid worth £1.1million, Football Insider can reveal.

The League One side announced on Thursday evening they had agreed to sell the 25-year-old striker to the Ligue 2 outfit in a shock move.

A recruitment source has told Football Insider that the deal is worth over £1m to MK Dons after Toulouse president Damien Comolli spearheaded the pursuit.

The former Liverpool and Tottenham director of football knows his English football extremely well and Healey’s scoring heroics have caught his eye.

Healey impressed in the third tier of English football last season, banging in 12 goals in 21 appearances across all competitions.

He was sidelined for a significant period of the season with a thigh strain he suffered before September’s trip to Blackpool – he missed 15 matches over the winter period.

The centre-forward scored in three successive League One matches upon his return from injury and bettered that feat later in the season after he scored in five success matches at the back end of January.

His goals helped save the Dons from relegation last season as they finished 19th in League One, five points clear of safety after the season was curtailed.

The Dons signed Healey from Cardiff City last July after a successful loan spell at Stadium MK in the latter stages of 2018.

The Manchester-born attacker began his career with Connah’s Quay Nomads in Wales before making his big move to Cardiff City in 2013.

Since then he has spent time at Dundee United, Torquay and Newport County – a move to Toulouse would be his first time playing outside of the UK.

In other news, Leeds United have been told what it will take to prise Ryan Kent from Rangers as new bid going in.