The Hoops hierarchy are keen to tie down their prize asset amid growing interest from clubs south of the border as well as Europe’s elite.

A Celtic source has told Football Insider that the French striker’s camp have been reluctant to enter into “serious” negotiations over an extension to his current agreement, which expires in 2022.

He is happy and settled at Parkhead, where he is the outstanding player in a team targeting a fourth consecutive domestic treble when the Scottish season eventually recommences.

But the French striker is ambitious and eager to eventually test himself in one of Europe’s major leagues.

Edouard would need certain conditions to be met by Celtic for him to commit to either a new deal or staying beyond this summer.

That includes a release clause in the deal giving him the freedom to leave if a club pays the fee.

Celtic already regard Edouard as more valuable than their two record sales, Kieran Tierney (£25million) and Moussa Dembele (£19million), each of whom left in the previous two windows.

The runaway league leaders refused to cash in on Edouard during the January window, but the club privately recognise it will be very difficult to fend off advances of the elite in the summer.

Manager Neil Lennon admitted earlier this month the club has made no progress in contract talks with the front man.

Edouard signed a four-year contract in the summer of 2018 when his initial season-long loan from Paris Saint-Germain was converted into a club-record £9million transfer.

His 45 Celtic appearances this season have yielded 27 goals and 19 assists while he has also banged in a remarkable 11 goals in just six France Under-21s matches. 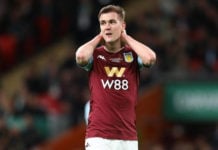