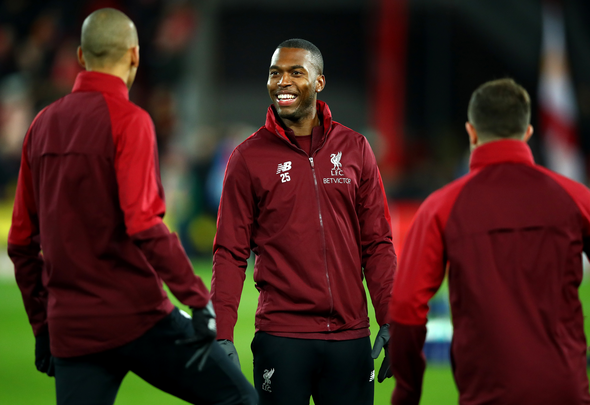 Newcastle United are not pursuing the free transfer signing of Daniel Sturridge, Football Insider can reveal.

The ex-Liverpool striker is a free agent and is keen to reignite his Premier League career.

90 min linked Newcastle with a potential move for the 31-year-old after being offered his services.

But Football Insider has been told by a Newcastle source it is a non-starter.

The Magpies already have 25 players in their squad so they would not have been able to register him anyway.

The link to Sturridge comes after it was revealed last week that star striker Callum Wilson will be ruled out for six to eight weeks with a hamstring injury.

Steve Bruce selected Dwight Gayle to lead the line for Monday night’s trip to Chelsea but the Englishman cast an isolated figure as the visitors lost 2-0 at Stamford Bridge.

Club-record signing Joelinton and local lad Andy Carroll are the only other two senior centre-forwards at Bruce’s disposal.

Sturridge has been a free agent since March of last year when his contract at Turkish side Trabzonspor was terminated after just six months.

No better feeling than getting those 3 points, seeing the ball hitting the back of the net and Var not interfering. Banter with the lads, coaches, physios .Not to mention making the fans happy. I’m hungry for it mate. Trusting in GODS divine plan to take me back where I belong ❤️

The former England international was banned from playing football until 17 June 2020 after he breached betting rules.

In other news, Newcastle United are furious with the owners of Watford over their handling of potential Longstaff transfer.