By Richard Parks
Leeds United fans ripped into Kemar Roofe on Twitter for his performance in their 4-1 home defeat to play-off rivals Cardiff City on Saturday.
The 25-year-old attacker played the full 90 minutes of the clash at Elland Road as Leeds suffered another major dent in their bid to end their lengthy spell in the lower leagues.
Thomas Christiansen’s side went two goals behind due to strikes from Callum Paterson and Junior Hoilett, Gaetano Berardi was then dismissed in first-half injury time after a second yellow card and Cardiff added a third goal through Sean Morrison.
Ex-Leeds defender Sol Bamba netted an own goal in the second period to reduce the deficit, but Neil Warnock’s side ran out comfortable winners as Anthony Pilkington added a fourth for Cardiff late in the game.
Leeds fans on social media took their frustration out with winger Roofe following his display, despite him scoring 11 goals across all competitions this season.
He was unable to make a serious impact in the final third and criticism was aimed at his lack of physicality and ability to deliver in such a demanding league.
Here is a selection of the best messages on Twitter:

Do we still have the receipt for roofe? #lufc

If anyone after watching Kemar Roofe on Tuesday and today can honestly say he’s any good i’ll call you a liar. He’s not good enough. Same with Alioski. Physically weak. It’s just won’t wash in this league. It’s too strong #lufc

Referees fault or not. Alioski & Roofe are a waste of a shirt. Fact.

Pass the ball to Roofe, might as well just give the ball back to the opposition

The result means that the Yorkshire giants are still without a league win in 2018 and are seven points adrift of the play-off positions with 16 games left to play.
In other Leeds United transfer news, it can be revealed that a centre-forward who has player for the team this season has had his contract terminated. 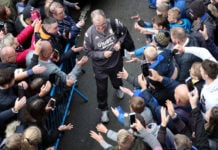