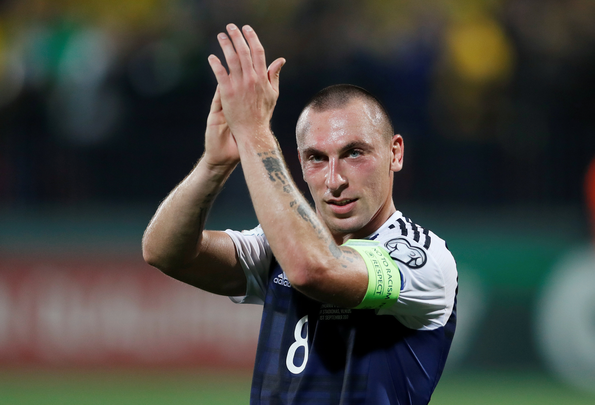 Celtic captain Scott Brown has made it clear that he has no time for the critics who don’t believe his commitment to the Scotland cause.
The national team skipper came out of international retirement to try and help Scotland qualify for the 2018 World Cup to no avail.
Brown has yet to decide if he will return to the Scotland fold following the sacking of former manager Gordon Strachan.
Only he will decide if he will play for Scotland again, as he tries to stay fit for Celtic games.
“I need to think about playing for as long as I can and doing what’s best for me. If it comes to it, stuff everybody else, to be perfectly honest” he said, as quoted by the Daily Record.
“If the Scotland games come and the new manager wants me to come along then I’m happy to go.
“But I’ll be 35-and-a-half by the time the campaign finishes so it depends. As soon as you start fading away at Celtic, not playing every week, you can’t go into those high intensity internationals.”
Brown has 51 caps for the national team, and made his Scotland return in the 3-0 defeat to England in November 2016 after he had quit Scotland due to his fears about injury problems.
Brown and his Celtic team-mates are currently on their winter break in Dubai as they prepare for the second-half of the season, and attempt to pull off the unprecedented achievement of winning back-to-back domestic trebles.
The Hoops already retained the Betfred Cup and have a healthy eight point lead over Aberdeen in the Scottish Premiership title race and set to return to action on the 20th of January as they begin the defence of the Scottish Cup with a match against Brechin.
In other Celtic news, the man who discovered Lewis Morgan thinks he will be a big success at Celtic
We’ve launched a << BREAKING NEWS FEED>> exclusively for your club. ‘Like Us’ on Facebook by clicking here if you want 24/7 updates on all Celtic breaking news.