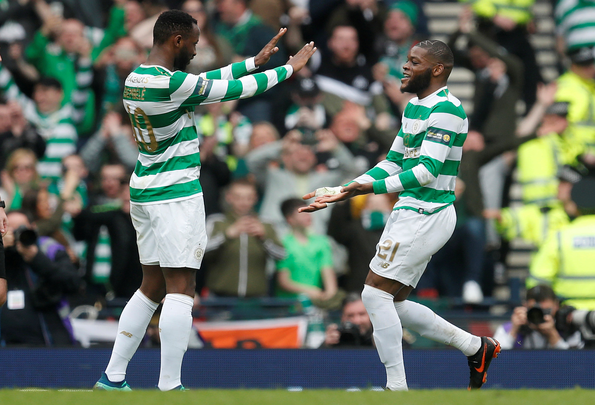 The huge success of Olivier Ntcham this season should encourage Celtic to push the boat out and make some big money signings in the summer.

After a relatively slow start to his Hoops career, he has become a vital part of the first-team, with his partnership with Scott Brown key to the success enjoyed by the Hoops this summer.

Ntcham finished the season in style, being named as man of the match in the 10 man 3-2 win over Rangers at Ibrox, then scoring the second goal in the Scottish Cup Final triumph over Motherwell, his ninth goal of the season.

It is interesting to note that the only two players that Brendan Rodgers has spent ‘big’ money on since becoming the Hoops boss – Ntcham and Scott Sinclair – have both been big successes.

That should encourage Rodgers to go to Peter Lawwell and the rest of the Hoops board and ask them to bring in some big money buys in the summer that will take the side to the next level, particularly in Europe.

If the Hoops end up selling the likes of Moussa Dembele or Stuart Armstrong in the summer there is even less excuse not to splash the cash, as a squad that has conquered Scotland two seasons in a row deserves addition which will allow them to make an impact in Europe.

In other Celtic news, a BT Sport pundit has hailed the Hoops as ‘iconic’