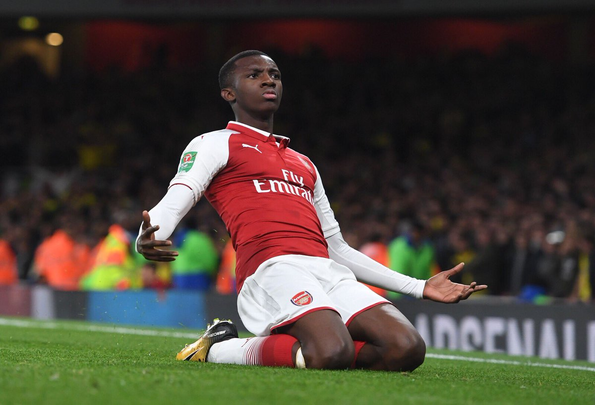 If Steven Gerrard or Mark Allen were watching the Toulon Tournament semi-final between Scotland and England, they must have been impressed with the performance of Arsenal youngster Eddie Nketiah.

His strength and speed caused the Scottish defence all kinds of bother, and his finishing was excellent too.

Even with the appointment of Unai Emery and a fresh slate for all at Arsenal, Nketiah is likely to only be a bit-part player for the Gunners next season, behind the likes of Pierre-Emerick Aubameyang and Alexandre Lacazette in the pecking order.

He did feature for the Gunners on 10 occasions last season, but only two of those performances came in the Premier League.

He will desperate for some game time next season, and he seems an ideal fit for Gerrard’s revolution at Ibrox.

The Gers were far too reliant on Alfredo Morelos for goals last season, as none of their other strikers contributed much if anything at all.

Nketiah, who can also play on the left and right wing, seems like the ideal foil for Morelos if the Gers were to play two up-front, but he also looks more than capable of playing up-front on his own.

The Gers aren’t averse to bringing in loan deals these days, and Nketiah looks like he could be one of the very best that’s around.

In other Rangers news, a new Gers coach is excited about the prospect of life at Ibrox