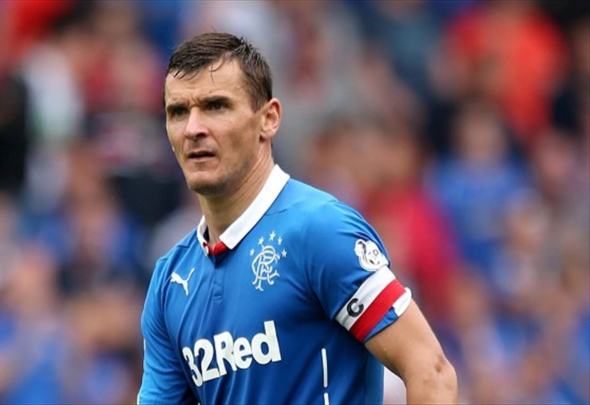 Former Rangers captain Lee McCulloch has admitted that there is a “line you can’t cross” after Lee Wallace and Kenny Miller were suspended by the Ibrox giants following a bust-up with manager Graeme Murty in the wake of the 4-0 Scottish Cup thrashing by Celtic at Hampden last weekend.

The pair have been sent home pending an investigation into their behaviour at the end of the Hampden humiliation with neither likely to play for the club again.

McCulloch thinks the allegations are out of character for Wallace – who served as McCulloch’s vice captain before taking the armband himself – and thinks the former Hearts star has shown his “loyalty” to the Gers over his seven years at Ibrox.

“Lee is the club captain and all I can say about him is that, when the club was in turmoil in 2012, he was my vice-captain and we both decided to stay,” McCulloch said, as quoted by the Scottish Sun.

“He was loyal to me and he wasn’t disruptive — he’d ask my opinion on things and vice-versa.

“He remained at Ibrox and I think he’s shown his loyalty to the club over a period of time.

“I don’t know exactly what happened after Sunday’s game but, in modern-day football, there’s a line you can’t cross.”

Wallace’s contract ends next summer which makes it likely that the 30-year-old will be told to find a new club in the summer, once the club has concluded its investigation.

Wallace joined Rangers in 2011 from Hearts for £1.5million and was made club captain in 2015 after McCulloch was released and the Gers failed to sign John Eustace after a six-month trial.

Loyalty is always to be commended but it doesn’t mitigate the allegations against Wallace. The club captain should always have a voice in the dressing-room but, as McCulloch says, there is a line that can’t be crossed. If Wallace and Miller have crossed that line then they deserve everything coming their way. IF they were unhappy with the tactics or preparation then there is a way to handle that and losing the plot in the dressing room isn’t it. Both players are experienced enough to know that though, which makes this even more puzzling.