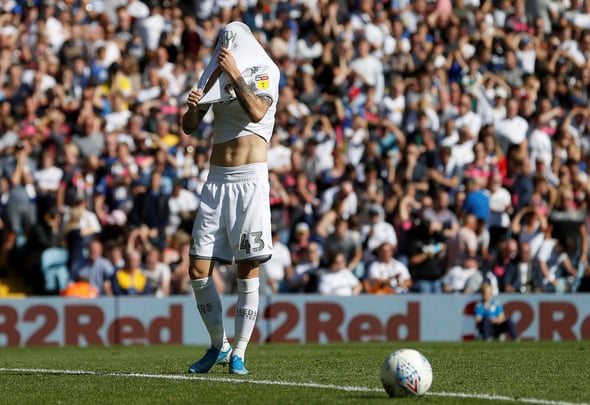 Darren Bent has torn into Leeds United midfielder Mateusz Klich after he missed a penalty against Derby County on Saturday afternoon.

The former Derby and England striker, speaking exclusively to Football Insider assistant editor Russell Edge, says that he is not opposed to the Polish star’s languid approach to spot kicks, in which he takes a short run-up and rolls the ball towards goal, but that “there is no excuse” to be missing from 12 yards.

Klich rolled the ball past the post, rather than into the back of the net, with Leeds 1-0 up against the Rams, Chris Martin’s late strike meaning the points were shared at Elland Road.

Bent says he has no problems with the style of the Polish international but insists he has to be hitting the ball on target every single time he steps up.

Asked about Klich’s penalty technique, Bent told Football Insider: “I like it but the only thing I’d say about it is don’t miss the target. I wouldn’t even have minded if the goalkeeper dove the right way and saved or caught it.

“I’d go: ‘Okay, it’s a poor penalty,’ but there’s no excuse not to hit the target, especially when you’re calm with your run as well. To roll them in, if you’re going to do that technique, you need to hit the target.

“I don’t care if the keeper saves it, just hit the target.”

Klich also stepped up to take a penalty late on against Yorkshire rivals Barnsley earlier this season, converting from the spot to hand the Whites a 2-0 victory over the Tykes.

He has an impressive record when it comes to scoring from 12 yards, netting all six of his efforts while on loan at FC Twente, while his only other miss came while playing for PEC Zwolle.

In other Leeds United news, Darren Bent has been left fuming to Football Insider about one piece of news breaking out of Elland Road this week.