Frank McAvennie fears West Ham face a losing battle to keep Declan Rice this summer – even if they avoid relegation.

Speaking exclusively to Football Insider, the ex-Hammer claimed the homegrown star, 21, is unlikely to be as loyal to the club as fans would hope.

McAvennie cited Rice’s switch of international allegiance from Republic of Ireland to England as proof he may regard the grass as greener on the other side.

The Irons’ star player has been regularly linked with a move to one of the Premier League elite competing regularly for the Champions League positions.

Chelsea, who West Ham signed Rice from in his mid-teens, have been touted as the a strong option, partly due to the presence of best pal Mason Mount.

“I hope Declan Rice sorts his life out,” McAvennie told Football Insider. “There is a lot of rumours about him going and I am not sure if he will stay this summer.

“Look what he did to Ireland. He could not make up his mind.

“I do not think he will be a stalwart for England over the next few years because they have got a lot of players coming through. Yes Declan is playing every week but he might
think that he has to go to a big club and shine to cement his place in the England side.

“But if he goes they will be getting big money for him.” 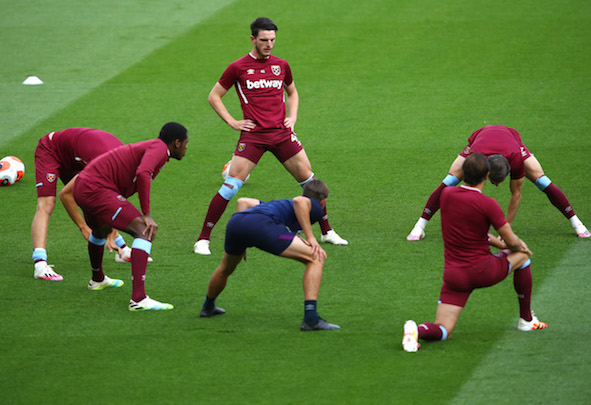 Rice has played every minute of the Hammers’ 31 Premier League matches this term, including last night’s 2-0 defeat to Tottenham.

The second consecutive defeat for David Moyes’ side since the restart leaves them 17th in the Premier League table, level on points with 18th-placed Bournemouth, who have a game in hand.