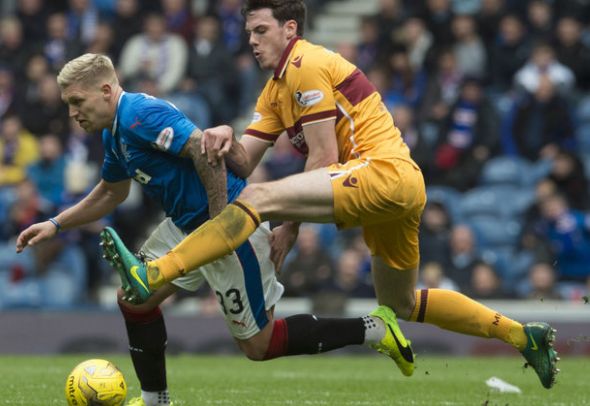 The Daily Record reports Rangers are ready to make a move for the Motherwell defender.

The 23-year-old has been a mainstay of the Motherwell defence this term, making 40 league and cup appearances.

He has also represented England C on three occasions – here are three reasons why Caixinha must do everything possible sign him.

Fill a gap in the squad

Caixinha is reportedly releasing Clint Hill and Philippe Senderos at the end of the season so he needs to bring in at least one new centre-back. Danny Wilson will be the only experienced centre-back left in Caixinha’s squad after those two depart so Heneghan’s arrival is crucial. He has been a star in Motherwell’s side this season and he would provide a cool head to the Gers’ back line.

Rangers will feature in the Europa League next season after securing a top-three finish, marking their first European campaign in five years. With those extra fixtures Caixinha will need to deepen his squad with fit, young players who can cope with playing two games in a week – Heneghan can do that. It will be another pull to Ibrox for the Englishman too – he has never played in Europe before so there is no doubt he would relish the chance at Rangers.

He knows the league

Heneghan has featured 34 times in the Scottish Premiership this term, and despite only being 23 he has made a massive difference to the Motherwell back line. Although it is only his first season in the division, he has looked assured and comfortable there. He will only improve as he gains experience and having Wilson, one of the best centre-backs in the league, alongside him will fast-track his development.

In other Rangers news, Caixinha has admitted he has met with three of his transfer targets.