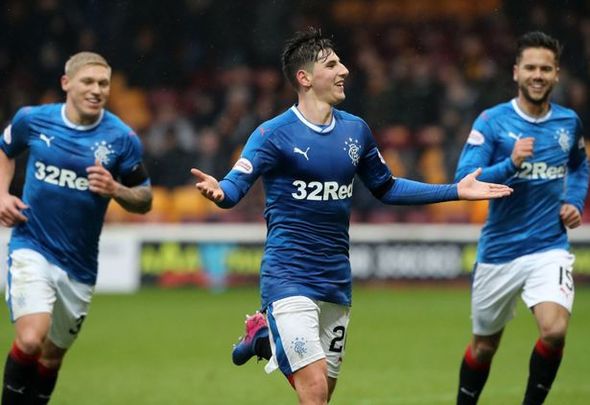 After contributing four goals and three assists from 11 appearances since his January switch, Rangers appear to have unearthed a gem in Emerson Hyndman.

However, the midfielder is set to return to Bournemouth at the end of the season when his loan spell expires, and is understood to be in talks with boss Eddie Howe over his role at the Premier League club for next season.

But Football Insider reveals three reasons why Hyndman should turn his back on Bournemouth, and seek a permanent stay at Ibrox with Rangers.

His move to Ibrox has seen him earn a key first team role in Scotland, and such a role would not be guaranteed if he were to return to Bournemouth in the summer.

Ex-Rangers chief Mark Warburton showed great trust in the 20-year-old to perform, and that trust has been translated into the tenure of new boss Pedro Caixinha.

He was immediately handed a starting role for Caixinha’s first game in charge against Hamilton at the weekend, scoring a goal in a 4-0 win.

Rangers have taken a strong liking towards Hyndman during his loan spell. but the USA international could risk throwing his important role away if he were return to the Premier League and fight for his place.

The youngster found first team opportunities at Dean Court hard to come by during the first half of the season, following the signing of Jack Wilshere on loan from Arsenal.

Yet while the Arsenal midfielder has lost his place in the first team in recent weeks, Howe is still considering making him a permanent fixture of the squad, with his contract set to expire in the summer.

But even after Hyndman’s impressive displays in Scotland, he may struggle to compete for a regular starting role with a player of Wilshere’s calibre and experience.

Therefore, instead of slipping back down the pecking order at Bournemouth, Hyndman should instead seek to continue his excellent development with Rangers.

The lure of the Premier League in itself is enticing enough, but the opportunity to be part of a big project like Rangers is an important factor to consider.

In reality, Bournemouth are likely to spend the next few years fighting to retain their Premier League status. A mid-table finish would perhaps be the biggest challenge for them, but Caixinha has his sights on great success with Rangers.

The Portuguese intends to plug the increasing gap between Rangers and chief rivals Celtic, and re-establish the Ibrox outfit as one of the dominant sides in Scottish football.

Hydman could be an integral part of that. It is likely to take time, but if faced with a choice of battling relegation with Bournemouth, or being a part of Rangers’ rise from the ashes, Hyndman should choose the latter.

In other Rangers transfer news, Caixinha has hailed the importance of this Rangers duo following the win over Hamilton.